The company said exclusive new battery technology could propel some as far as 400 miles per charge. 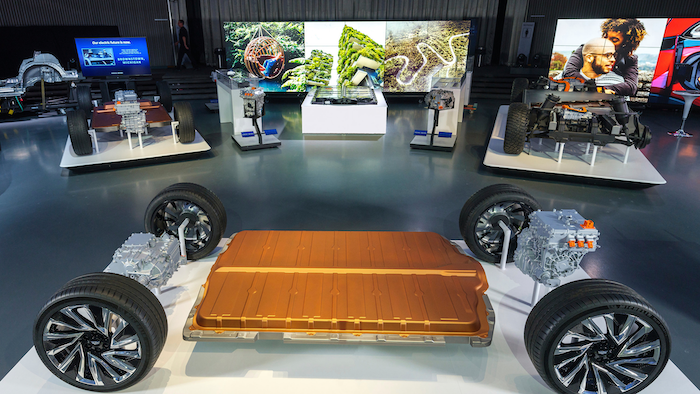 DETROIT (AP) — General Motors, trying to refashion itself as a futuristic company with technology to compete against Tesla, rolled out plans Wednesday for 13 new electric vehicles during the next five years.

The company touted an exclusive new battery technology that could propel some of the vehicles as far as 400 miles (644 kilometers) on a single charge as it tries to capture electric vehicle enthusiasm that has brought wild growth to rival Tesla's share price.

At an event for investors, dealers and analysts at its sprawling technical center in the Detroit suburb of Warren, Michigan, GM executives said the new vehicles would be built using modular chassis and drive systems for manufacturing simplicity.

“We want to put everyone in an EV, and we have what it takes to do it,” she said at a presentation for investors.

Some of the new vehicles will be able to go from zero to 60 mph (97 kilometers per hour) in as little as three seconds — performance that rivals electric vehicle sales leader Tesla Inc.

New all-electric models will come from the Chevrolet, Cadillac, GMC and Buick brands starting this year, beginning with the Cadillac Lyriq luxury SUV to be unveiled in April.

A new Chevrolet Bolt small SUV comes in the summer of 2021. There's also the GMC Hummer EV pickup coming to dealers in the fall of 2021.

The company said a joint venture with Korean battery maker LG Chem will use a low-cobalt chemistry to drive down battery costs to below $100 per kilowatt hour.

Executives told the group that the next generation of GM's electric vehicles will be profitable.

Barra said the new vehicles can increase sales and market share, and the batteries and drive units could be licensed to other companies to bring in more revenue.

She said the company plans to sell more than 1 million electric vehicles in North America and China by the middle of the decade. To get there, GM will spend more than $20 billion developing the vehicles through 2025, she said.

“They’re going to need to weather that, not only with investors, but just from an overall financial standpoint,” he said.

The announcement also comes at a time when the global economy is slowing, in part due to the coronavirus outbreak. LMC on Wednesday reduced its 2020 U.S. new vehicle sales forecast from 16.8 million to 16.5 million, according to Schuster.

LMC expects automakers to sell 17 million fully electric vehicles by 2030, or about 16% of worldwide demand. It will be 25% to 30% of the market in Europe, 20% in China and 8% in the U.S., LMC estimated. Those numbers are smaller than what GM is predicting, but Schuster said sales could rise because GM has such a wide range of vehicles to offer.

“In order to have breakthroughs, you have to have investments,” he said. “It’s going to bear fruit. It’s just a question of how long it’s going to take. That’s unknown at this stage.”