The measure would make Maryland’s transit fleet more than 50% zero-emission by 2030. 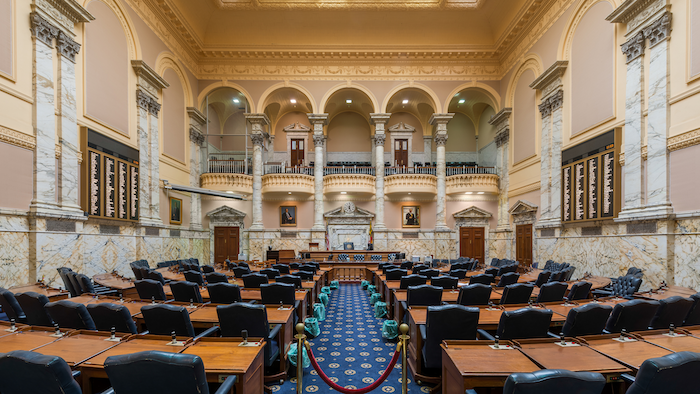 ANNAPOLIS, Md. (AP) — Maryland could begin replacing old diesel and hybrid state-operated transit buses with electric and zero-emission ones no earlier than July 2022 if a bill passes the General Assembly, jolting Maryland’s fleet into the future.

Delegate Marc Korman, D-Montgomery, is sponsoring House bill 432 and said at a hearing Feb. 18 that it is “slightly more aggressive” than Hogan’s plan since the bill would make Maryland’s fleet more than 50% zero-emission by 2030.

“This is the right step to go in terms of saving the state money, and obviously it has huge benefits for the environment,” Zucker testified at a Senate bill hearing Feb. 19.

Sen. Arthur Ellis, D-Charles, said he likes the idea of more electric buses, but he is concerned that the buses’ power would be supplied by coal burning power plants instead of renewable energy resources.

“Unless we find a way of producing more renewable energy solutions, bills like this will be on the backs of my constituents, those in Southern Prince George’s (where the population is) majority-minority. Our community members have the worst health effects when it comes to asthma,” Ellis said during the bill hearing.

The Maryland Transit Administration operates about 775 transit buses, overseeing CityLink in Baltimore and more than 50 other bus routes, and it is scheduled to sign a new contract that would update the fleet, according to a state legislative analysis.

Currently, Maryland’s fleet is diesel and hybrid according to a Maryland Transit Administration spokesperson.

Zucker told Capital News service that there will be an amendment to include zero-emission buses.

These can include electric and hydrogen fuel-cell buses, because they do not release “tailpipe pollution,” according to the Sierra Club.

The bus contract would begin payments in 2022, and the legislative analysis predicts 70 new zero-emission buses would be purchased each year.

“We anticipate that our next procurement will be entirely zero-emissions vehicles, with delivery of vehicles beginning in 2025,” Brittany Marshall, director of media relations for the Maryland Transit Administration, told Capital News Service in an emailed statement.

The Hogan administration has not taken a position on the Democrats’ legislation, according to the governor’s press secretary.

Maryland Director of Chesapeake Climate Action Network Steven Hershkowitz told lawmakers the group is in favor of the bill because it will reduce greenhouse gas emissions.

Hershkowitz said if the legislation passes, “we would see about 50,000 metric tons of carbon removed. That’s the equivalent of taking 11,000 cars off the road.”

Electric buses would cost Maryland, annually, $20.6 million more than diesel buses, according to the legislative analysis.

The analysis also noted that costs would be higher since the estimates do not take into account necessary garage upgrades or staffing expenses.

Ramón Palencia-Calvo with the Maryland League of Conservation Voters said electric buses can save the state money over time.

Zero-emission buses are already transporting riders in Maryland, like in Frederick County where there are currently six electric buses in operation, according to TransIT deputy director Roman Steichen.

Electric buses cost Frederick County $130,000 per bus, and save the county $300,000 over a bus’s “12-year useful life” — largely due to lower annual energy and maintenance costs, Steichen wrote in an email to Capital News Service.

Last year, Prince George’s County received a $2.2 million grant for battery-powered buses and charging stations; the buses are expected to serve routes at the University of Maryland and National Harbor, according to a press release from the Federal Transit Administration.

Prince George’s County has not purchased the buses but anticipates them to arrive by early 2021, according to Paulette Jones, the public information officer for the Public Works and Transportation department.

In testimony at the Senate Education, Health and Environmental Affairs Committee on Feb. 19, Hershkowitz said transportation is the largest sector contributor to greenhouse gas emissions in Maryland, at 36% in 2017 according to the Greenhouse Gas Reduction Act, which aims for statewide greenhouse gas reductions of 40% from 2006 levels by 2030.

“If you really think about the work that has to be done by 2030, the legislators have taken a major step in the right direction,” Hershkowitz said.