The automaker will receive a 75% tax abatement to produce battery cells in Northeast Ohio. 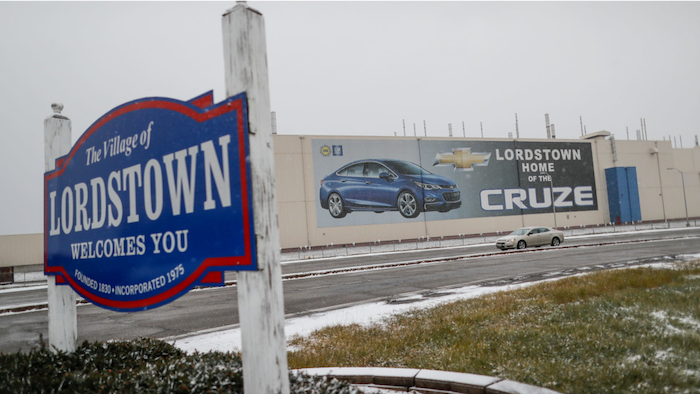 A banner depicting the Chevrolet Cruze model vehicle is displayed at the Lordstown plant on Nov. 27, 2018.
John Minchillo/AP Photo

LORDSTOWN, Ohio (AP) — General Motors Co. will receive a tax break to build a new electric battery cell factory in Ohio next to the site of a much larger assembly plant it shut down last year.

Village leaders in Lordstown approved a 75% tax abatement that will extend over 15 years and allow the company to move forward with the plant.

“What we had to get done and needed to get done for General Motors, we did," Mayor Arno Hill said after the vote Tuesday.

GM and Korea's LG Chem announced in December that they had formed a joint venture to work together on battery technology and build the new plant near Youngstown. GM has said it will be among the largest battery factories in the world.

GM stopped making cars at its Lordstown assembly plant last March after more than 50 years of production. It later sold the factory to a newly formed company that wants to make electric pickup trucks.

The battery plant was announced last fall during contract talks with the United Auto Workers union, but it won’t make up for the lost jobs at the small-car plant. The joint venture also likely will pay less than what GM pays unionized assembly plant workers.

The battery plant will create about 1,100 jobs, while GM employed 4,500 workers at the assembly plant when it was running three shifts until about three years ago.

Most of those employees at the assembly plant either retired or transferred to other GM factories.

The village of Lordstown is seeking more than its typical share of income tax from the new plant by asking for the school’s income tax, which is about $225,000 annually, the Warren Tribune Chronicle reported.

Hill said that the village needs the money because of the loss of GM's car plant and income tax and that the school district could receive about $600,000 in property taxes once the plant is built.

The Lordstown school board has not decided whether to give up its income tax from the GM battery plant.