Prosecutors are turning up the heat on the disgraced car industry executive. 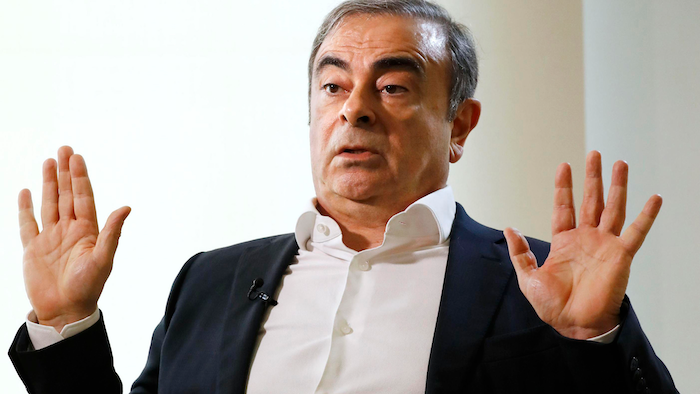 PARIS (AP) — French prosecutors are turning up the heat on disgraced car industry executive Carlos Ghosn, opening a judicial inquiry into alleged money laundering, fraud and misuse of company assets during his time at the helm of the Renault-Nissan alliance.

The prosecutor's office in the Paris suburb of Nanterre announced the inquiry Wednesday in a statement. The statement does not name Ghosn directly, but the inquiry focuses on activities at Renault and Nissan under his watch, and stemmed from information provided by Japanese authorities and by Renault after Ghosn's 2018 arrest in Japan on charges of financial misconduct.

Ghosn — who denies wrongdoing and says the Japanese case against him was politically driven by enemies at Nissan — escaped from Tokyo in December for Lebanon, where he grew up.

The French inquiry aims to determine who is at fault for a string of alleged financial violations between 2009 and 2020.

That includes “suspicious financial flows” between Renault and the SBA car dealership in Oman, the prosecutor's statement said. Ghosn's French lawyers have said the payments to SBA were “justified bonuses" for having boosted car sales in the Persian Gulf, and denied allegations that the funds benefited Ghosn or his family personally.

The French inquiry is also targeting several million euros of travel and other costs paid by Netherlands-based Renault-Nissan holding RNBV but suspected to have been for Ghosn's personal use.

The Nanterre prosecutor said the new inquiry could allow French investigators to dig into activity in other countries as well.

Ghosn's French lawyer, Jean-Yves Le Borgne, shrugged off the French inquiry as “not very significant” and said it will allow Ghosn's legal team to formally present its own case to French prosecutors for the first time.

Nissan and Renault have seen sales slump since the loss of their star boss, credited with rescuing Nissan from near-bankruptcy.