Rory Gamble will serve the remainder of former President Gary Jones' term, which runs until 2022. 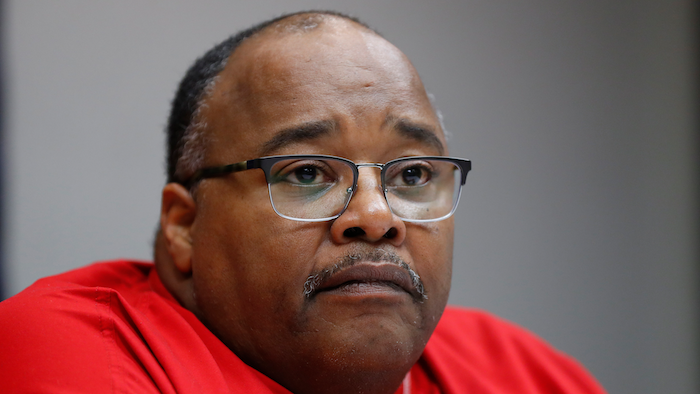 DETROIT (AP) — Members of the United Auto Workers executive board have voted to appoint Rory Gamble as the union's new president.

He will serve the remainder of former President Gary Jones' term, which runs until the union’s convention in June of 2022.

Jones stepped down last month after being implicated in a widening embezzlement and bribery scandal at the union. He has not been charged with any crimes, but his Detroit-area home was raided by federal authorities last summer.

Gamble, 64, was a vice president who successfully led negotiations this year on a new contract with Ford Motor Co. Before that, he served as director of a regional office near Detroit. He was named acting president when Jones stepped down.

“This wasn’t planned, and it is a tall order,” Gamble said in a statement. “I promise one thing: when I retire and turn over this office, we will deliver a clean union on solid footing.”

The union’s International Executive Board voted unanimously for Gamble Thursday at a meeting in the Detroit suburb of Southfield, UAW spokesman Brian Rothenberg said.

Ten people with ties to the UAW have been charged in the corruption investigation. Eight have pleaded guilty, including two former vice presidents and the widow of another. Separately, three people who worked at Fiat Chrysler have been convicted.

Gamble had been acting president of the union for about three weeks, and has imposed additional financial controls and other measures to stop or root out corruption.

The union has been in a crisis for months since authorities raided Jones' home and the home of former President Dennis Williams in an investigation that began in 2015.

Top union officials have been accused of embezzling hundreds of thousands of dollars through regional conferences that were held in Palm Springs, California. Vance Pearson, the former head of a region in St. Louis, has been charged in the case. Jones was president of the region before Pearson.

Jones' lawyer has said that all expenses were submitted in detail and were not questioned by UAW accounting department or the executive board.

Former Vice President Joe Ashton, who also served on the General Motors board, pleaded guilty Wednesday, admitting he received $250,000 in kickbacks after arranging a contract for 58,000 watches paid for by the General Motors-UAW joint training center.

Other union officials were charged in a bribery scheme involving payments from the Fiat Chrysler-UAW training center that were made to keep them “fat, dumb and happy,” according to court records.

As acting president, Gamble added an ethics officer to handle corruption allegations. He and Secretary-Treasurer Ray Curry have replaced the 400,000-member union's auditing firm, added four internal auditors and hired a big accounting firm to study its financial controls in an effort to prevent corruption.

The union's executive board will appoint a new vice president to handle Ford at a meeting in January.