Deal May Be Near as GM CEO Joins Talks

The appearance of key GM executives is a strong sign that bargainers are closing in on an agreement to end a month-long strike. 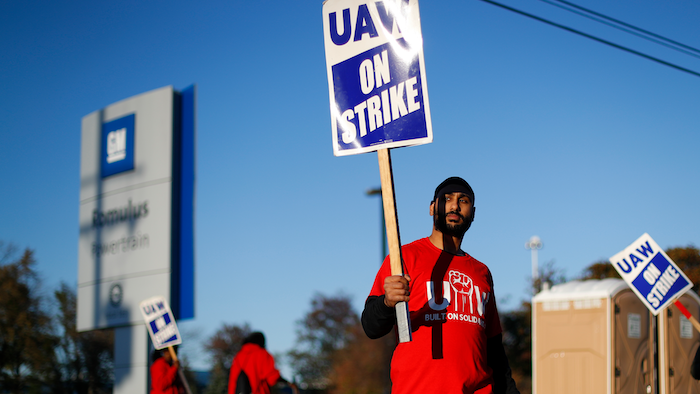 In this Oct. 9, 2019, file photo, a member of the United Auto Workers walks the picket line at the General Motors Romulus Powertrain plant in Romulus, Mich.
AP Photo/Paul Sancya, File

DETROIT (AP) — General Motors CEO Mary Barra joined negotiators at the bargaining table, an indication that a deal may be near to end a monthlong strike by the United Auto Workers union that has paralyzed the company's factories.

Barra and GM President Mark Reuss were in the bargaining room early Tuesday, a person briefed on the talks said, but they left later in the morning as committees began work on specific contract language. The person didn't want to be identified because the talks are confidential.

The appearance of two key executives is a strong sign that bargainers are closing in on a contract agreement that would end the strike, which began on Sept. 16.

Another person briefed on the talks said the only issues that remain are faster pay increases for workers hired after 2007, apprenticeships for skilled trades workers, and the specifics of winding down a joint union-company training center. The person also didn't want to be identified because the talks are ongoing.

The union has summoned its national council of factory-level leaders to Detroit for a meeting Thursday billed as an update on contract talks. The group could be assembling to vote on a tentative agreement. It also will decide if workers should return to their jobs before or after they vote on the deal.

"I don't think Mary Barra would have returned unless they were making progress," said Art Wheaton, an auto industry expert at the Worker Institute at Cornell University. "And I don't think they'd have told everybody to return to Detroit on Thursday."

The strike, now in its 30th day, is the longest against an automaker since a 54-day strike in 1998 in Flint, Michigan. That strike cost GM $2 billion. The union also went on a brief two-day strike against General Motors in 2007.

Both sides are under pressure to end the walkout, which has cost GM close to $2 billion in profits and forced workers to live on $250 per week, about one fifth of their base pay. Last week, with the strike dragging on, the union said it would increase strike pay to $275 per week.

Negotiators last week appeared to be deadlocked and each side issued letters or statements accusing the other of failing to bargain in good faith. A quiet period began over the weekend and negotiators worked into the night to resolve most of the remaining issues, according to both people briefed on the talks.

A union demand that all vehicles sold in the U.S. be built here apparently has been resolved, but terms are unknown. The company did offer $9 billion worth of investments at U.S. factories, $7.7 billion from the company and another $1.3 billion from joint ventures. The $1.3 billion includes a battery cell factory near Lordstown, Ohio, where GM wants to close an assembly plant.

They also apparently have agreed on wages and lump-sum payments, although the amounts are unknown. A company offer last week would give workers lump sums equal to 4% of their base pay in the first and third years of the four-year contract, with 3% pay raises in the second and fourth years. This would be in addition to annual profit-sharing checks. This year workers got checks for $10,750 each. GM also offered to lift the $12,000 cap on profit-sharing checks. The union also sought sweeter retirement benefits.

After initially trying to cut health care costs, GM agreed to leave benefits and payments untouched. Union members pay 3% premiums while most workers at large companies in the U.S. pay over 30%, according to the Kaiser Family Foundation.

Both sides also have agreed on a path for temporary workers to get permanent jobs. GM had proposed that they become permanent after three uninterrupted years of work, but that was shortened. GM initially offered an $8,000 bonus to workers to sign the contract, but sweetened that to $9,000.

Last week the Center for Automotive Research, an industry think tank, estimated that GM is losing $450 million every week due to production shutdowns. The total loss likely has reached $2 billion. The strike immediately silenced about 30 GM factories in the U.S. and has brought down two plants in Mexico and one in Canada. Parts companies that supply GM have had to lay off thousands of workers.

If there's an agreement, the strike would not end immediately. Bargainers would have to vote on a deal, followed by union officers and regional directors. Then factory-level leaders, including local presidents and bargaining chairmen, also will vote. If they approve it, then this group would also decide if workers would put down picket signs and go back to work. Workers could stay on strike until after all members vote on the contract. That voting could take a week or longer.

But Wheaton said the union might decide to return to work during the ratification vote because temperatures are starting to get colder, and it might not make sense for them to stay on the picket lines.

Understanding KPIs as they relate to your industry and business is essential for any growing business. The immense amount of information available to decision-makers today can also be overwhelming, so we narrowed it down to the 20 most important metrics.
Nov 1st, 2021

The multimillion-dollar pilot programs could include self-driving shuttles and electrified transportation.
Nov 18th, 2021

A cable in the passenger occupant detection system can be faulty.
Nov 17th, 2021

The company hopes to make the area a “center of electric vehicle research, development and manufacturing power.”
Nov 16th, 2021

Tesla Driver's Complaint Being Looked Into by U.S. Regulators

The driver said the car took control and forced itself into the incorrect lane.
Nov 15th, 2021

It could lead to recharging EVs as fast as a gas station fill-up.
Nov 12th, 2021 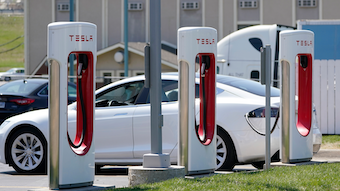 The bill would provide a $7,500 tax credit for consumers who purchase electric vehicles through 2026.
Nov 11th, 2021
Follow Us
Most Recent