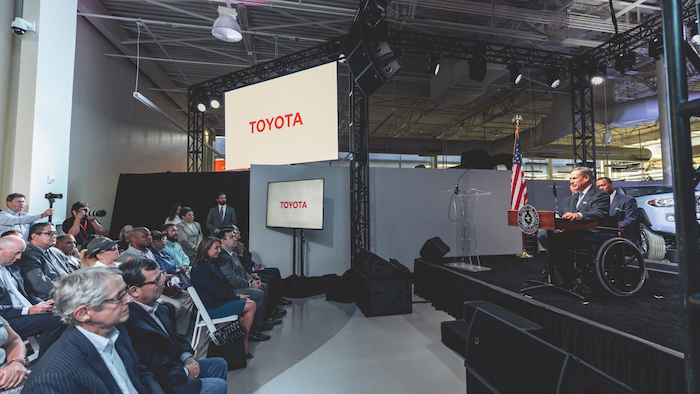 Office of the Texas Governor

The world’s largest automaker plans to spend nearly $400 million at its Texas truck plant as part of a multi-billion-dollar investment in its U.S. operations.

Toyota said in its announcement this week that the $391 million project in San Antonio would introduce advanced manufacturing capabilities to meet strong demand for the Tacoma and Tundra pickups built at the facility. The complex would also feature “multi-vehicle production capabilities,” although officials, according to the Rivard Report, did not indicate that new models could be added to the Texas plant.

Toyota’s announcement also confirmed earlier reports that Toyota transmission and drivetrain supplier Aisin AW would built a $400 million facility in the suburb of Cibolo. That factory is expected to create 900 jobs, and officials suggested overall investment by Toyota and its partners could lead to $10 billion in spending and 40,000 jobs in the region over the next decade.

“This is exactly the kind of project our city has strategically been preparing for,” San Antonio Mayor Ron Nirenberg said in a statement. “It shows we’re a competitive region ready for big investment from large manufacturers.”

Toyota is spending $13 billion across its U.S. operations between 2018 and 2021. The automaker also pledged $500,000 to San Antonio education and workforce development group Alamo Promise.