Auto sales are starting to slow, but Ford, GM and Fiat Chrysler are still making good money — and the union will want a bigger piece. 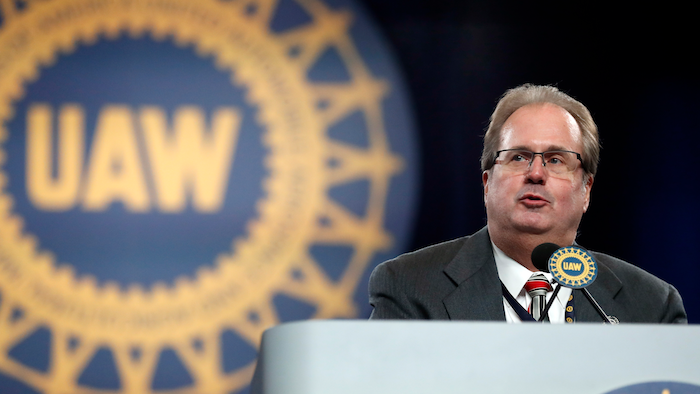 DETROIT (AP) — In recent years, Detroit automakers have been at relative peace with the United Auto Workers union because times have been good and profit-sharing checks have been fat.

That could change this week as talks open on new four-year contracts with the union representing 142,000 workers across the nation.

Auto sales are starting to slow as well as profits, health care costs are rising and a labor cost gap has widened with workers at foreign-owned assembly plants in the South.

But Ford, General Motors and Fiat Chrysler are still making good money, and the union will want a bigger piece.

Plus, General Motors wants to close four U.S. factories, which the union has promised to fight.

Here are some key things to know as bargaining begins Monday with a ceremonial handshake at Ford:

COULD THE UNION GO ON STRIKE?

Yes. At a bargaining convention in March, President Gary Jones told delegates that the union is raising strike pay and said the union would walk out if necessary. The UAW also has been adamantly opposed to GM's plans to close the factories, including large assembly plants in the Detroit area and in Lordstown, Ohio, near Cleveland. A strike is unlikely before the contracts expire at 11:59 p.m. Sept. 14.

WHAT HAPPENS IF THERE IS A STRIKE?

It depends on how long it lasts and how widespread it is, but a targeted company would quickly run out of parts and couldn't build vehicles. Consumers would then see fewer cars and trucks on dealer lots, and they wouldn't be able to special order vehicles. Companies and workers would lose money. In previous contract talks, there was little mention of strikes. The last time UAW workers walked out of auto plants was in 2007 in a short strike against GM.

WHAT ARE THE ISSUES?

Companies are looking to trim hourly labor costs, which have grown when compared with Southern U.S. factories run by Toyota, Nissan, Hyundai-Kia, Volkswagen and others. Fiat Chrysler pays about $55 per hour in wages and benefits to UAW workers, while it's $61 at Ford and $63 at GM. That compares with an average of $50 per hour at plants owned by foreign-based automakers, according to the Center for Automotive Research, an industry think tank. Automakers want costs to be closer to their competitors so they don't have to charge higher prices or reduce profits like they did before the Great Recession. Higher labor costs were among the reasons GM and Fiat Chrysler needed government bailouts and bankruptcy protection in 2009. UAW-represented workers make about $30 per hour in wages alone. Also health care costs are growing, and UAW workers pay only about 5% of the cost. Salaried workers pay about 30%. Automakers would like UAW workers to pay more or help reduce costs.

Still, the Detroit Three keep making big money. Together they posted over $15 billion in net profits last year. Union workers will want more of that. They also would like to shift more of their pay from profit sharing, which can fall in a downturn, to hourly raises. This year GM workers got $10,750 profit-sharing checks for 2018, while Ford workers got $7,600 and FCA union members got $6,000. Then there are the GM plant closures in Michigan, Ohio and Maryland. The union has said it will try to get new vehicles for the factories, which employed thousands of workers. Most will get jobs at other GM plants, but will have to move to stay employed. "I'm still holding out hope that GM will put a product in there," said Dave Green, president of a UAW local at the now-closed Lordstown plant, which made the Chevrolet Cruze compact car. Lordstown has become an issue in the 2020 election because President Donald Trump pledged to bring manufacturing jobs back to northern Ohio. GM has a tentative deal to sell the plant, but workers are skeptical.

BOTH SIDES SEEM FAR APART. IS IT POSSIBLE TO SETTLE WITHOUT A STRIKE?

Yes. Companies could make guarantees of new vehicles and jobs in exchange for concessions. Automakers also are likely to seek more use of temporary workers to reduce costs to fund any pay raises that might be granted. Health insurance may be a thornier issue. "Health care is kind of the third rail of bargaining," said Kristin Dziczek, vice president of industry and labor at the Center for Automotive Research. "People like what they have and they like not having to pay very much for it," she said. Automakers and the union have jointly studied reducing costs by bulk-buying common surgical procedures at top-notch medical centers, Dziczek said. Workers would have to travel, but they'd get world-class care, she said. They also could get better care through company-sponsored clinics similar to one FCA has at its factories in Indiana.