The confidential memo said the company had over 50,000 net new orders so far this quarter, and has a chance to exceed the record set in the fourth quarter of last year. 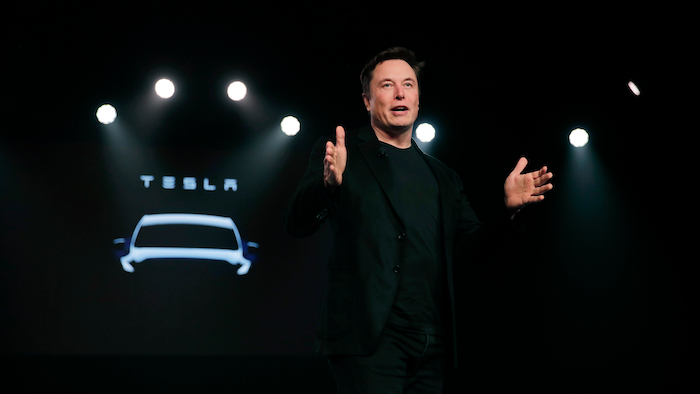 Shares of Tesla, suffering one of the worst stretches in company history, rebounded Thursday after CEO Elon Musk told employees that orders are up.

The company's stock closed up 1.4% to $195.49 on a volatile day that started out with a loss. Tesla stock has shed 16% in the past three weeks and about 41% since the beginning of the year, and is trading at the lowest levels since late 2016.

Musk told employees in a memo late Wednesday that the company had over 50,000 net new orders so far this quarter, and that based on current trends, Tesla Inc. has a chance of exceeding the record 90,700 deliveries set in the fourth quarter of last year. The memo was circulating on the internet and confirmed as authentic by a person with knowledge of its origin. The person didn't want to be identified because the memo was confidential.

Musk's memo said the company needs to sustain production of 1,000 Model 3s each day, something that it has done multiple days. It's averaging production of 900 vehicles per day, the memo said.

Tesla's stock was under significant pressure early after Morgan Stanley analyst Adam Jonas told investors on a private call Wednesday that demand for Tesla's cars was lower than predicted. He says if demand does not recover next year "then this becomes a restructuring story." A recording of the call was obtained by The Associated Press.

Demand for Tesla vehicles fell by about one third from the fourth quarter of last year to the first quarter of this year, Jonas said. At the first-quarter pace, the company will sell about 250,000 vehicles this year, more than 100,000 below the low end of the company's forecast of 360,000 to 400,000, he told investors.

Tesla reported delivering 63,000 vehicles from January through March, down 31% from 2018's fourth quarter.

Jonas, who says the stock could go to $10 per share in a worst-case scenario, has predicted deliveries of 82,000 for the second quarter, still behind Tesla projections. Other forecasters, he said, see only around 75,000. He said the company's gross debt has grown to $13 billion, and as a percentage of revenue, Tesla's debt is far higher than competing automakers such as General Motors, Ford, BMW and Volkswagen.

Jonas also says that Tesla has 49,000 employees, the size of a company that sells a million vehicles per year.