The automaker hopes to add Renault's chief executive and several outsiders to strengthen its governance following the arrest of former chairman Carlos Ghosn. 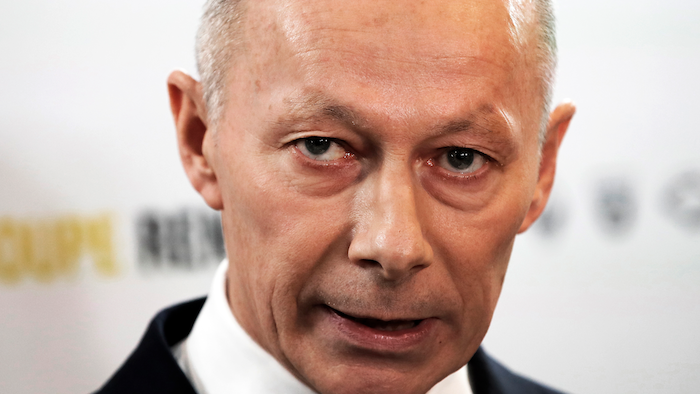 In this Feb. 14, 2019, file photo, Renault CEO Thierry Bollore addresses the media after the presentation of the company's 2018 full year results in Boulogne Billancourt, outside Paris.
AP Photo/Christophe Ena, File

Nissan proposed Friday adding Renault's chief executive, Thierry Bollore, to its board, as well as several outsiders, to strengthen its governance following the arrest of its former chairman, Carlos Ghosn.

The Japanese automaker's proposals will be put to a shareholder vote at a meeting set for June.

Yokohama-based Nissan Motor Co. said it will retain Hiroto Saikawa as its chief executive and a board member. It also wants to add Sony Interactive Entertainment's former chairman, Andrew House, and Nihon Michelin Tire's chairman, Bernard Delmas, to the board.

Nissan's proposal calls for an 11-member board, including seven outside directors. The board now has eight members, including Jean-Dominique Senard, chairman at French alliance partner Renault SA, who was approved by shareholders earlier this year.

Ghosn is facing financial misconduct charges. He says he is innocent.

A Nissan governance committee set up after Ghosn's arrest recommended adding more independent outside directors to oversee the company's compensation and auditing.

"Nissan sees the re-establishment of a highly robust corporate governance structure as imperative," Nissan said in a statement. "With the lessons from the recent executive misconduct still fresh, Nissan resolves to rigorously pursue separation of supervisory and executive functions."

Governance experts say Nissan lagged behind other major Japanese companies in governance measures, such as having outside board directors and instituting checks on compensation.

Renault owns 43 percent of Nissan and the Japanese automaker owns 15 percent of Renault. The French automaker sent Ghosn to Nissan in 1999 to help rescue it from the brink of bankruptcy. Under his guidance over the next two decades it was transformed into one of the most successful auto alliances in the industry.

Earlier this week, Nissan reported its profit for the fiscal year that ended in March plunged to about half of what it was the previous year. It is projecting a further deterioration in its earnings.