The automaker cut its outlook to reflect slowing sales, higher costs and the fallout from a criminal investigation of its former chairman, Carlos Ghosn. 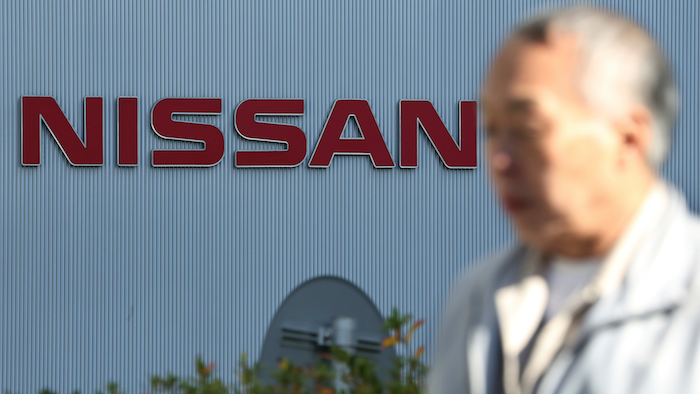 In this Jan. 9, 2019, photo, a man walks past the logo at global headquarters of Nissan Motor Co. in Yokohama.
AP Photo/Koji Sasahara

Nissan cut its profit forecast for the fiscal year through March on Wednesday to reflect slowing sales, higher costs and the fallout from a criminal investigation of its former chairman, Carlos Ghosn.

Nissan said the downgrade reflects higher costs in the U.S. from a warranty extension campaign for some vehicles and falling sales due to "corporate issues," alluding to the Ghosn scandal.

Ghosn was arrested in November and is facing charges of underreporting his income and breach of trust. He says he is innocent. He was released on bail in March and is awaiting another court decision on bail after his re-arrest on April 4.

Nissan, which is allied with Renault SA of France, has seen sales lag in France and Japan, where Ghosn is widely known. In the U.S. and China, buyers aren't as affected by the scandal, but the markets there overall have slowed.

Other factors contributed to the revision, such as production not keeping up with demand for the Note, an extremely popular model in Japan. But the high-profile scandal has weakened the brand appeal of the maker of the Leaf electric car, Infiniti luxury model and X-trail sports utility vehicle.

The automaker reduced its sales outlook by 0.2% for the fiscal year through March 2019 to 11.5 trillion yen ($103 billion), compared to its previous forecast.

It was Nissan's second downgrade for its outlook following one in February that cited faltering sales in China and the U.S.

At that time, Nissan also logged costs about 9.2 billion yen ($83 million) related to the alleged underreporting of Ghosn's compensation.

Nissan has promised to strengthen its corporate governance to prevent a recurrence of what it says is serious wrongdoing by Ghosn.

Ghosn was sent by Nissan's French alliance partner, Renault SA, to help turn the Japanese automaker around when it was near bankruptcy 20 years ago.

The future of the alliance is one of many questions clouding Nissan's future following Ghosn's ouster since he was the main liaison for the alliance, which includes smaller Japanese automaker Mitsubishi Motors Corp.

Renault owns 43 percent of Nissan, while Nissan owns 15 percent of Renault. There has been speculation Renault wants a complete merger with Nissan. Nissan, based in Yokohama, reports earnings May 14.

A seized ball joint may cause a fractured rear suspension.
Jul 19th, 2021
Follow Us
Most Recent