Martin Winterkorn and other top managers face fraud and other charges in connection with a multi-year effort to cheat on diesel emissions testing. 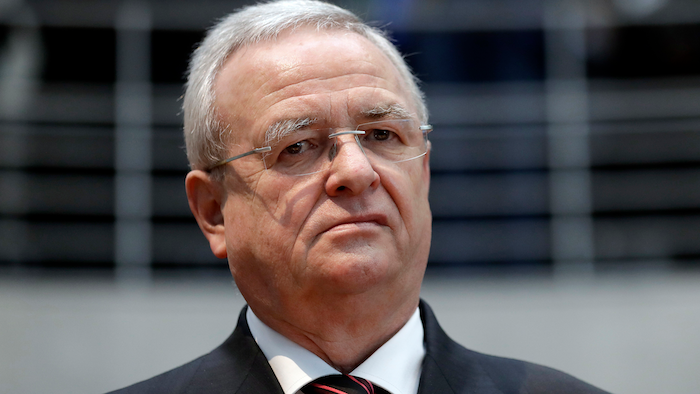 In this Jan. 19, 2017, file photo, former Volkswagen CEO Martin Winterkorn arrives for a questioning at an investigation committee of the German federal parliament in Berlin.
AP Photo/Michael Sohn, File

German prosecutors have charged former Volkswagen CEO Martin Winterkorn and four others with fraud and other offenses in connection with the company's massive, multi-year effort to cheat on diesel emissions testing.

Prosecutors said Monday that Winterkorn knew about the deceptive practice since at least May 2014, and failed to put a stop to it. That contradicts Winterkorn's claim that he didn't learn of the problem until shortly before U.S. investigators announced it in September 2015. Winterkorn resigned as CEO days later.

The prosecutors said in a statement that the defendants — all of them top Volkswagen managers — were part of an ongoing deception that started in 2006.

The company has admitted installing software that could tell when the cars were on test stands for emissions certification. When the cars went on to everyday driving, the emission controls were turned off, improving performance but emitting far more than the U.S. legal limit of nitrogen oxides, a class of pollutant that is harmful to health.

In all, some 11 million cars worldwide were equipped with the illegal software, in a case that damaged the reputation of diesel technology and accelerated the shift to electric cars in Europe.

The prosecutors added that defendants carried out a software update costing 23 million euros in 2014 in an attempt to cover up the true reason for the elevated pollution emissions during regular driving.

Winterkorn and the others face from six months to 10 years imprisonment if convicted on charges of aggravated fraud involving serious losses. Other charges include unfair competition breach of trust.

Bonuses collected due to sales based on the deception could be forfeited. Prosecutors said the amount of bonuses that could be forfeited range from around 300,000 euros to 11 million euros ($340,000 to $12.45 million).

Winterkorn's attorney, Felix Doerr, said that the defense could not comment because prosecutors had not given them adequate opportunity to review the case files. Doerr said in a statement that prosecutors had provided seven DVDs with 300 file folders of material, including data files that the defense had not seen before, only on April 5 and that requests for a chance to review the files and make a written answer had received no response.

The prosecutors' move is one of a number of legal proceedings unleased by the scandal. First, the Braunschweig prosecutors are continuing their probe against 36 more suspects, according to Monday's news release.

Winterkorn had already been indicted in March by U.S. authorities on charges of wire fraud and conspiracy to violate the Clean Air Act. He could receive up to 20 years in prison if convicted on those charges, but cannot legally be extradited from Germany to the U.S.

Beyond that, Volkswagen has paid more than 27 billion euros (currently $31 billion) in fines and civil settlements with authorities and car owners in the months and years since being caught. The company apologized and pleaded guilty to criminal charges in the United States, where two executives were sentenced to prison and six others charged, although they could not be extradited.

And the U.S. Securities and Exchange Commission charged the company and Winterkorn on March 15 with defrauding investors through misleading statements about vehicle quality and environmental compliance.

Lastly, investors in Germany are also seeking damages, saying that Volkswagen did not meet its obligation under securities laws to give them timely notice of troubles that could affect the stock price. Volkswagen has said it met its duty to investors.

The scandal unleashed widespread scrutiny of diesel emissions across the industry. It soon turned out that many models from other carmakers also emitted far more pollution on the road than on the test stand, due to regulatory loopholes exploited by carmakers such as turning exhaust controls off at certain temperatures to reduce engine wear. Diesel sales, once half the European car market, have sagged.

That in turn has undermined carmakers' plans to use diesels — which get better mileage — to help meet tougher European Union limits from 2021 on emissions of carbon dioxide, the main greenhouse gas blamed for global warming. One result has been greater pressure to develop battery-powered cars to avoid heavy fines for breaching the new emissions limits. Volkswagen says it plans to spend 30 billion euros to develop electric vehicles by 2023.