The company touted the flexibility of its electric vehicle platform with a throwback design. 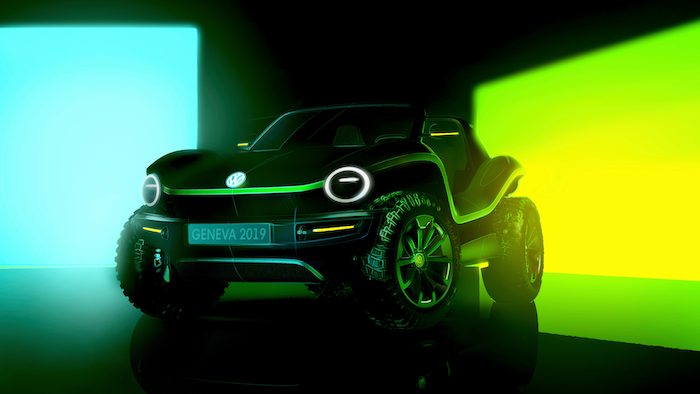 Volkswagen last week touted the flexibility of its MEB electric vehicle platform, which will support the German automaker’s forthcoming electric fleet as well as those of other companies.

But to further emphasize the platform’s potential, the company also rolled out a dune buggy based on the MEB system at the Geneva Motor Show.

Officials said the electric ID.BUGGY concept could travel about 155 miles on a charge and go from zero to 62 miles per hour in just more than seven seconds.

But the concept vehicle also features high clearance for going off-road, along with water-resistant digital systems and a waterproof interior material for when the dune buggy gets a little too close to the shore.

The prototype also doesn’t include doors or a roof — only an optional sunshade would provide some protection from the elements — and the design harkens back to the dune buggies of the 1960s, which were often built on the frame of the classic VW Beetle.

The vehicle body, officials said, features a minimal amount of sensors to enable tinkerers to remove the structure and build on top of an MEB chassis following their purchase.

VW officials wrote that although the concept is strictly that, and nowhere near production-ready, “the flexibility of Volkswagen’s future electric vehicles mean an electric beach buggy could become a sight on the shores once more.”