An increase in weekly strike pay likely sends a message to General Motors, which has proposed closing five factories in the U.S. and Canada by early next year. 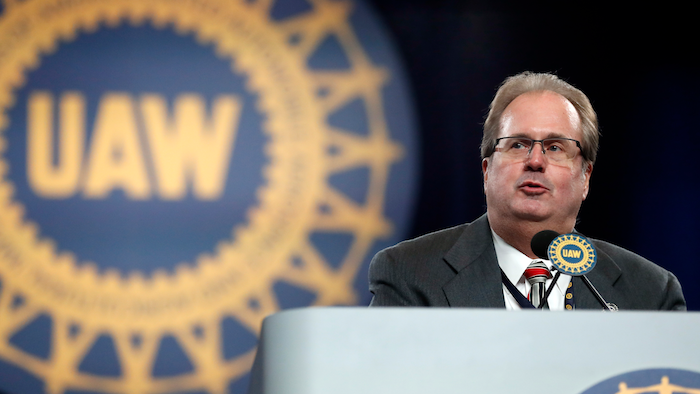 The president of the United Auto Workers union warned automakers that the union is prepared to strike if it doesn't get its way in upcoming contract talks.

Gary Jones told delegates at the union's bargaining convention in Detroit Monday that it would raise weekly strike pay from $200 to $250 per week this month and $275 in January of next year.

No one expects a strike, but the UAW is prepared to walk off the job, Jones told delegates. He said raising the payments is a symbol to members that the union has their backs.

The not-so-veiled warning likely is directed more at General Motors than Ford and Fiat Chrysler, the other two Detroit automakers. GM has proposed closing five factories in the U.S. and Canada by early next year as it grapples with falling demand for sedans. All three have a combined total of 154,000 workers represented by the UAW.

The move would eliminate about 6,000 jobs in the two countries, although GM says many workers will retire and that it has about 2,700 factory jobs open if workers transfer to other plants.

The company already has idled its small-car assembly plant in Lordstown, Ohio, and plans to close car factories in Oshawa, Ontario, and Detroit-Hamtramck, Michigan, by January of 2020. Also scheduled to close this year are transmission factories in Warren, Michigan, and near Baltimore.

The company has said the future of the U.S. factories will be decided in the upcoming contract talks. It has said the plants aren't getting new products due to the shift from cars to SUVs and trucks and because GM needs to cut excess factory capacity to generate money to develop electric and autonomous vehicles.

Jones has promised to fight the plant closures in the courts and at the bargaining table. The UAW already has sued GM over closures, which it says violates the current contract. The union says GM is moving production to Mexico at the expense of U.S. workers.

Jones told members in a speech at the opening of the convention that the union's strike fund now has over $721 million. The union increased dues in 2011 until the fund reaches $850 million. Delegates at the convention will decide the union's bargaining priorities for the next four years.

Talk of a strike is a different stance from contract talks that occurred since the automakers got into financial trouble in 2008. Until now, the union had pledged to be a business partner rather than an adversary.

A message was left Monday seeking comment from a GM spokeswoman.

Talks with Ford, General Motors and Fiat Chrysler begin this summer. The four-year contracts with all three expire on September 15.

The problem could stop the side and curtain air bags from deploying when needed.
Apr 15th, 2021
Follow Us
Most Recent