Executives of the French-Japanese auto alliance sought a "new start" after the arrest and dismissal of Nissan's former chairman Carlos Ghosn. 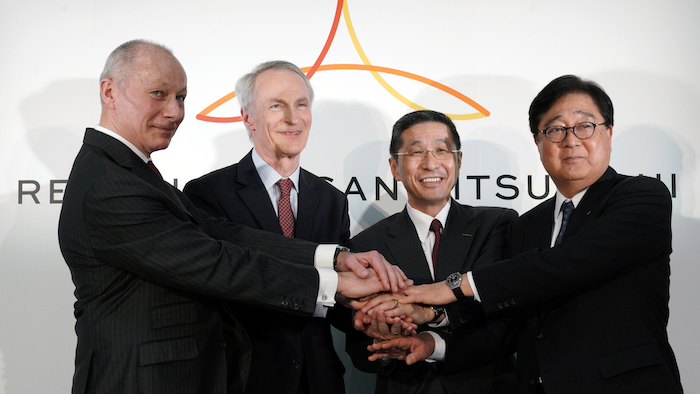 The chief executives of Renault, Nissan and Mitsubishi have announced a new board to oversee the French-Japanese auto alliance, seeking a "new start" for the partnership after the arrest and dismissal of Nissan's former chairman, Carlos Ghosn.

The alliance did not announce any changes in mutual stake holdings. The new board, consisting of those four executives, will meet every month in Paris or Tokyo and oversee various projects, helping to make the companies' operations more efficient, they said.

Ghosn still is one of eight members of Nissan's board. He had asked to attend the board meeting but was conspicuously absent after the Tokyo District Court rejected his request on Monday.

He needed court approval to attend because conditions for his release last week on 1 billion yen ($9 million) bail, after more than 100 days in custody, prohibit actions that may enable him to tamper with evidence.

Ghosn has been charged with falsifying financial reports by under-reporting his income and with breach of trust. He says he is innocent.

When questioned about Ghosn's case, Senard said he believed that people are presumed innocent until proven otherwise. He declined comment on whether Ghosn, who remains on Renault's board, will be allowed to attend its meetings even if he is able to leave Japan. At the moment, as he awaits trial, he is barred from leaving the country.

Nissan has not yet named a new chairman to replace Ghosn. Senard said he would not pursue that post. Senard will be chairman of the new alliance board and hopes to become vice chairman at Nissan, he said.

Doubts over the balance of power between Renault and Nissan had been growing after Ghosn's departure.

The Japanese automaker was on the verge of bankruptcy 20 years ago, when Renault sent Ghosn to help lead its turnaround. Nissan is now more profitable than Renault.

Since Ghosn's release, he has been seen in Tokyo on outings with his family.

He released a statement reasserting his innocence and calling his detention a "terrible ordeal," but has not commented since.

A statement released on Ghosn's behalf expressed disappointment over his inability to attend Tuesday's meeting.

"As an elected member of the board, Mr. Ghosn stands ready to fulfill his professional duties to the shareholders who elected him," it said.

"It is unfortunate that the meritless and unsubstantiated accusations against him have blocked his ideas and perspective from being deployed in service of the company he served for the past 20 years."