The Tokyo District Court rejected a request by Carlos Ghosn, released on bail last week, to attend the Japanese automaker's board meeting on Tuesday. 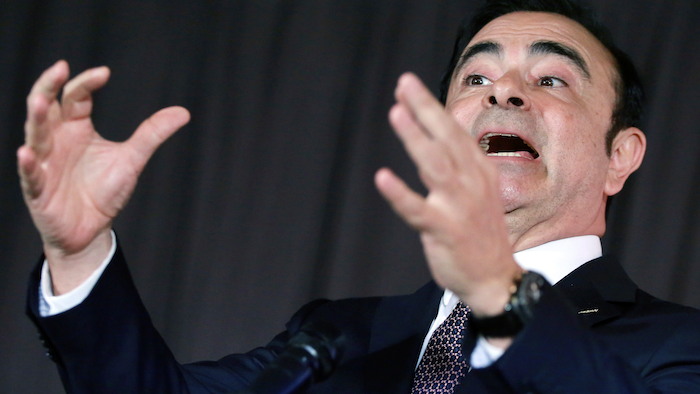 In this May 12, 2016, photo, then-Nissan Motor Co. President and CEO Carlos Ghosn speaks during a press conference in Yokohama.
AP Photo/Eugene Hoshiko

A Japanese court has rejected a request by former Nissan chairman Carlos Ghosn, released on bail last week, to attend the Japanese automaker's board meeting on Tuesday.

Nissan dismissed Ghosn as chairman after his Nov. 19 arrest, but he remains on the board. The Tokyo District Court said it rejected Ghosn's request on Monday but did not elaborate on the reasons.

It had been unclear whether Ghosn could attend the board meeting. The court's approval was needed based on restrictions imposed for his release on bail. The restrictions say he cannot tamper with evidence, and attending the board meeting could be seen as putting pressure on Nissan employees.

Prosecutors had been expected to argue against his attendance. They were not available for immediate comment.

Ghosn has been charged with falsifying financial reports in underreporting his compensation and breach of trust in making payments to a Saudi businessman and having Nissan shoulder investment losses.

He insists he is innocent, saying the compensation was never decided or paid, the payments were for legitimate services and Nissan never suffered the losses.

Since his release on March 6 from Tokyo Detention Center on 1 billion yen ($9 million) bail, he has been spotted taking walks in Tokyo with his family, but he has not made any comments.

His attempt to exercise what his lawyer, Junichiro Hironaka, called his "duty" by attending the board meeting signals one way he may be fighting back.

Hironaka has said Ghosn will speak to reporters soon. A date for a news conference has not been announced.

Nissan appears determined to highlight new leadership without Ghosn. It is part of an alliance with Renault SA of France, and more recently with Japan's Mitsubishi Motors, that was largely cobbled together by Ghosn, who led Nissan for two decades.