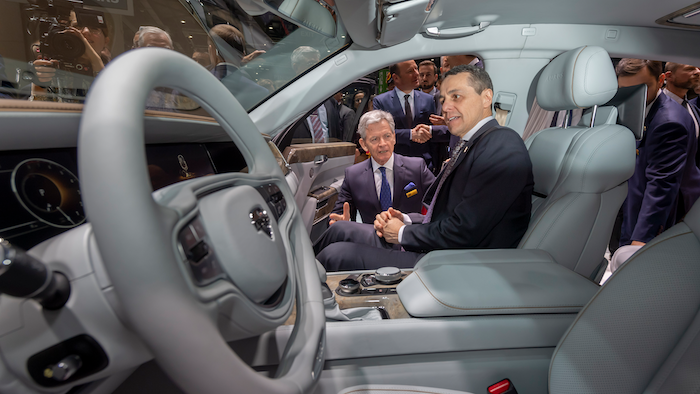 If you want to ride like Vlad — Russian President Vladimir Putin, that is — this may be the limo for you.

At the Geneva auto show, Russian automaker Aurus has trotted out a hulky, luxurious Senat Limousine L700 with lines vaguely reminiscent of a Rolls-Royce.

It's the European debut of a vehicle whose designers want to crack a Western market of rich pop stars and business execs.

The company's stand on Thursday featured a model that once toted around the Russian leader. He's also driven the Aurus himself.

"He is really deeply interested in technology and in many things hands on," Aurus CEO Franz Gerhard Hilgert said of Putin. "And so he needs to understand what it is, how it works — and if he likes it."

While not entirely as secure as Putin's model, the L700 comes in a seven-ton armored version, and an unarmored model is available, too.

Hilgert said the vehicle comes with 600 horse power, and automatic gearbox, everything from Russia.

Executives are aiming to start sales in Europe next year or 2021. Aurus spokeswoman Liliya Zhdanova said pricing wouldn't be announced until next month.