Volkswagen to Pump $800M into Electric Vehicles in North America

The German automaker will expand its plant in Chattanooga and create 1,000 jobs there as it gears up for electric vehicle production in 2022. 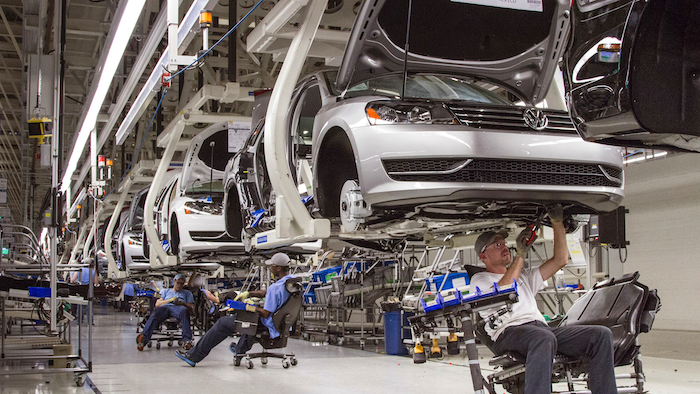 In this July 12, 2013, file photo, employees at the Volkswagen plant in Chattanooga, Tenn., work on the assembly of Passat sedans.
AP Photo/Erik Schelzig, File

German automaker Volkswagen said Monday its factory in Tennessee will be the focus of an $800 million investment in the company's manufacturing of electric vehicles in North America, a sign of a growing push into the electric car market by European companies.

Volkswagen made a couple of announcements that it will expand its plant in Chattanooga and create 1,000 jobs there as the factory gears up for electric vehicle production beginning in 2022. The company issued a news release and disclosed the expansion at the North American International Auto Show in Detroit.

The factory in Tennessee's fourth largest city will produce a vehicle using a modular chassis the company has said will help build electric vehicles for the mass market. Volkswagen currently builds two vehicles in Chattanooga, the midsize Atlas SUV and the Passat sedan. The company announced in March a $340 million investment in Chattanooga to build the five-seat version of the Atlas, the Atlas Cross Sport.

Volkswagen said last week it posted an annual sales record in 2018. The company has paid more than more than $31 billion in fines and settlements after it was caught installing software that let cars cheat on U.S. diesel emissions tests.

Wolfsburg, Germany-based Volkswagen said it plans to commit almost $50 billion through 2023 toward the development and production of electric vehicles and digital services.

"The market was moving away from diesel," Schuster said. "The scandal essentially accelerated that trend. The most obvious solution is electrification."

Electric vehicles are taking on a more important role globally, Schuster said. Among European brands, Mercedes, Audi, BMW and VW are "leading the charge toward a higher proportion of their models being electrified," the analyst said.

President Donald Trump and executives from VW and Germany's other biggest automakers discussed the companies' investments in the U.S. in December. Trump has been trying to pressure the German automakers into opening more factories in the U.S. and has threatened tariffs on imported vehicles.

Herbert Diess, CEO of Volkswagen AG, said in a statement that the plant in Chattanooga "is a key part of our growth strategy in North America." The facility sits on 1,400 acres (560 hectares) and currently employs about 3,500 people.

At the Detroit auto show, Diess said the automaker can also expand more rapidly than building a new facility elsewhere — though he sees "pros and cons" to the decision.

"It's not easy to attract further labor there — the labor market is a constraint," he said. "Still, we have invested a lot, we have a lot of governmental support there, a strong team there. It makes more sense to increase capacity in Chattanooga."

Two other automakers, General Motors and Nissan, have large manufacturing plants in the state. More than 900 auto suppliers, including large ones such as Hankook Tire and Bridgestone Americas, operate in Tennessee, officials said.