The luxury carmaker, owned by India's Tata conglomerate, will cut 4,500 jobs to address slowing demand in China and growing uncertainty about Brexit. 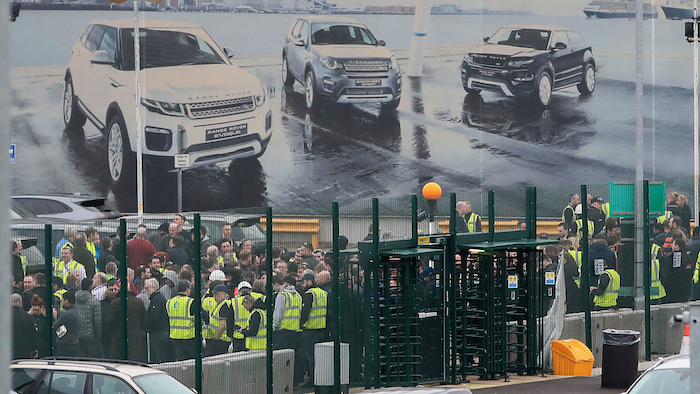 Staff gather inside the gates of the Jaguar Land Rover site in Halewood near Liverpool, England, Thursday Jan. 10, 2019.
Peter Byrne/PA via AP

Jaguar Land Rover said Thursday it will cut 4,500 jobs as the carmaker addresses slowing demand in China and growing uncertainty about the U.K.'s departure from the European Union.

The luxury carmaker, owned by India's Tata conglomerate, said the cuts will be in addition to 1,500 people who left the business in 2018. The cost-cutting program will begin with a voluntary reduction program in the U.K., where some 44,000 people are employed.

The latest job losses follow on from last year's 2.5 billion-pound ($3.2 billion) turnaround plan that was designed to deal with many of the headwinds facing the company — Brexit, rising trade tensions between China and the U.S. and new European emissions standards combined to push Jaguar into the red in the three months to Sept. 30, compared with the same period the year before. The company also announced further investment in electrification.

"The next chapter in the story of the Jaguar and Land Rover brands will be the most exciting — and challenging — in our history," CEO Ralf Speth said in a statement. "Revealing the iconic Defender, investing in cleaner, smarter, more desirable cars and electrifying our facilities to manufacture a future range of British-built electric vehicles will all form part of building a globally competitive and flourishing company."

Christian Stadler, professor of strategic management at Warwick Business School, said Jaguar was facing a "perfect storm of challenges," with the drop in Chinese sales being the most immediate problem.

"That is JLR's biggest market, but car buyers there are reluctant to make expensive purchases as the economy is growing at its slowest rate for a decade and the country is locked in a trade war with the U.S.," Stadler said. "At the same time Chinese dealers are demanding better terms, which JLR has resisted."

The cuts will not just be bad news for the Jaguar staff, Stadler said. Thousands more workers in the U.K. are part of Jaguar supply chain to the carmaker — jobs that will now also be at risk.

"Brexit is another factor, with businesses increasingly concerned about the prospect of a 'no deal' Brexit, which would mean tighter border controls," he said. "That would cause massive disruption as the U.K. car manufacturing industry is so closely integrated with Europe."

Also Thursday, Ford signaled "significant" cuts among its 50,000-strong workforce under plans to make it more competitive. The Dearborn Michigan-based company also said it would shift to more electric models.