Is Demand for Teslas Slowing?

The electric vehicle maker made about 9,300 more vehicles than it delivered last year, raising concerns that inventory is growing as demand may be starting to wane. 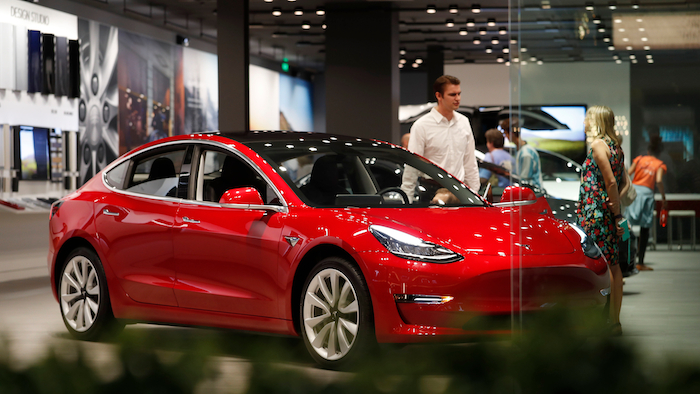 In this July 6, 2018, file photo, a Model 3 sits on display in a Tesla showroom in the Cherry Creek Mall in Denver.
AP Photo/David Zalubowski, File

Tesla made about 9,300 more vehicles than it delivered last year, raising concerns among industry analysts that inventory is growing as demand for the company's electric cars may be starting to wane.

If demand falls, they say, the company will enter a new phase of its business. Like other automakers, Tesla will have to either cut production or reduce prices to raise sales. A drop in demand could also curtail the company's earnings and jeopardize CEO Elon Musk's promise to post sustained quarterly profits.

On Wednesday, Tesla did cut prices, knocking $2,000 off each of its three models. The company said the cuts will help customers deal with the loss of a $7,500 federal tax credit, which was reduced to $3,750 this month for Tesla buyers and will gradually go to zero by the end of 2019.

"They have for a long time had more demand than supply," Gartner analyst Michael Ramsey said. "It's becoming apparent that that dynamic is changing."

Jeff Schuster, a senior vice president at the forecasting firm LMC Automotive, said demand for Tesla's lower-priced Model 3 has been artificially high for the past six months as the company overcame production problems at its Fremont, California, factory.

"You've had these inflated months because of delayed deliveries," Schuster said. "We're probably getting to that point where we're getting to equilibrium and consumers aren't necessarily waiting for vehicles."

Losing the tax credit will hit those who have been holding out for the $35,000 version of the Model 3, Schuster said. At present, Tesla is selling only versions that cost at least $44,000. Under federal law, buyers get the full tax credit until a manufacturer reaches 200,000 in sales since the start of 2010. Tesla hit 200,000 in July but the full credit continued for vehicles delivered by Dec. 31. It was cut in half on Jan. 1 and will go away by the end of the year.

"You've had your early adopters, those early followers have already come in" to buy, Schuster said. "Now you're trying to appeal to the mainstream market. I think that will have an impact on overall demand."

At the same time, inventory appears to be rising. The company parked hundreds of cars at lots and Tesla stores all over the country at the end of last year, which could indicate excess stock. Tesla wouldn't give inventory numbers but said it has lower stocks than its two biggest competitors, BMW and Mercedes.

The Associated Press found one lot on the north side of Chicago where Tesla was storing dozens of vehicles in late December, and Mark Spiegel, a hedge fund manager who bets against Tesla stock, said other lots were full across the country.

Tesla said it sometimes stores vehicles on lots as they're being shipped to company dealerships across the nation. The lot in Chicago has fewer cars on it now, the company said. "Our inventory levels remain the smallest in the automotive industry," the company said Wednesday.

Tesla also says Model 3 sales should grow worldwide as it expands distribution and begins to offer leases. Deliveries in Europe and China will start in February, and a right-hand-drive version is coming later in the year, the company said.

In addition, inventory dropped in the fourth quarter as Tesla "delivered a few thousand vehicles more than produced."

Tesla said it had about 3,000 vehicles in transit to customers at year's end. But even with that number, Schuster said production still exceeded deliveries, which doesn't fit Tesla's business model of building cars when they are ordered by customers. Still, even at 9,300, Tesla's inventory is smaller than other automakers that have to stock dealerships, Schuster said.