The Detroit News reported that the company plans to reopen a former engine plant on the city's east side to make Jeep Grand Cherokee SUVs. 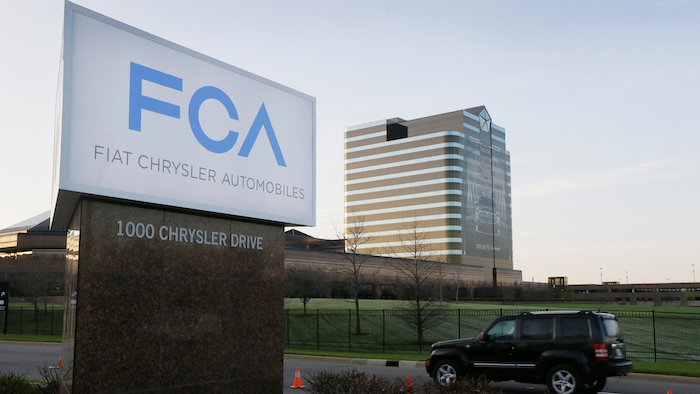 In this May 6, 2014, file photo, a vehicle moves past a sign outside Fiat Chrysler Automobiles world headquarters in Auburn Hills, Mich.
AP Photo/Carlos Osorio, File

Fiat Chrysler will open another assembly plant in the Detroit area, according to a person familiar with the automaker's plan.

The source said the plant will produce SUVs but did not specify when it will open or how many jobs it will create. The person spoke on condition of anonymity because the plan has not been made public.

The Detroit News reported Thursday that the company plans to reopen a former engine plant on the city's east side to make Jeep Grand Cherokee SUVs with three rows of seats starting with the 2021 model year. The plant will employ 100 to 400 people, the newspaper said. The Mack Avenue Engine II plant has been shuttered since 2012.

Fiat Chrysler has seen strong sales of light trucks and SUVs including its Jeep and Dodge Ram models, helping boost November U.S. sales to more than 181,000 vehicles, its best November in 17 years. Sales of the Ram line jumped 44 percent, but sales of Chrysler cars and minivans slumped 21 percent.

The company's chief financial officer told investors in June that trucks and SUVs would account for 80 percent of revenue by 2022.

Fiat Chrysler's decision to open another assembly plant comes as other automakers are retrenching. General Motors announced last week that it plans to cut up to 14,000 jobs in North America and consider closing five plants as it abandons many cars in favor of trucks and SUVS, as well as autonomous and electric vehicles.

President Donald Trump ripped GM for the cuts, which will include salaried workers and employees on factory floors. Trump has promised more jobs in the auto industry. At a rally last summer near a GM plant in Ohio, he told the crowd that jobs are "all coming back."

Lawmakers in both parties have also blasted GM, complaining that the company could be using savings from lower taxes to employ more Americans, not fewer.