Three Ohio congressmen suggested auto workers in Lordstown should get a chance at a new line of electric vehicles. 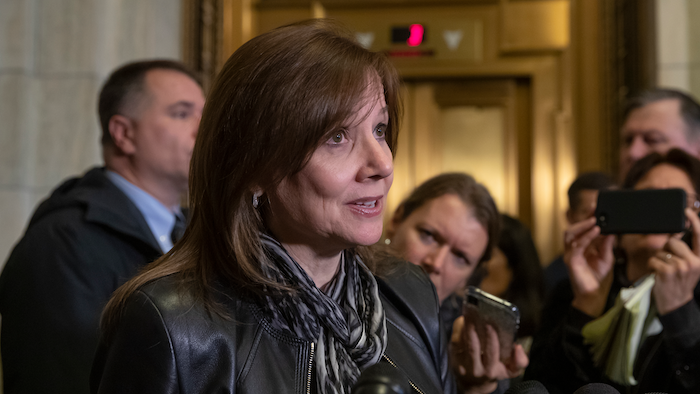 Three Ohio congressmen met with the head of General Motors Wednesday in Washington in their bid to keep an assembly plant from closing, urging her to give auto workers a chance at a new line of electric vehicles soon headed into production.

GM announced last week it will stop making the Chevy Cruze at its Lordstown, Ohio, plant by March and is considering closing the plant for good. It's part of a massive restructuring for the Detroit-based automaker.

"Just as the workforce has stood with General Motors over the years, we expect GM to stand with these workers — and give them a chance," Portman told reporters after the meeting.

Brown added, "This is the best GM assembly plant work force in all of North America. We know the impact this has on the Valley."

Already, 3,000 jobs have been eliminated at the plant since the beginning of 2017. GM has about 1,500 workers left at the Lordstown plant.

Brown said he's enlisted the help of Republican President Donald Trump and his labor secretary, Ohio Gov.-elect Mike DeWine, in addition to a host of local officials. Brown has also reached out to sitting Republican Gov. John Kasich, who leaves office next month.

Barra said it was an "incredibly difficult" decision to place Lordstown in an "unallocated" position because it directly affects GM workers as well as retirees and their pensions.

"We're working very hard to make sure General Motors is around for several decades in a leadership position, can provide jobs and support the communities and the stakeholders that are involved with the company," she said.

She said the company is working with the United Auto Workers union to explore training and relocation opportunities for affected workers.

A heckler interrupted Barra's remarks, peppering her with questions about workers who might want to remain in Lordstown rather than relocate and whose holidays have been ruined by the timing of the announcement.

"We are trying to do the right thing," she said. "We think Ohio is a very important auto state. We have a very good workforce there and we have a tremendous amount of workers in the state that will continue."

Portman said Barra told the senators she has an open mind, but wants to be careful not to elevate expectations.

"We believe that the workers in the community around Lordstown have proved themselves time and time again for almost five and half decades," Portman said. "Those workers have done their part."