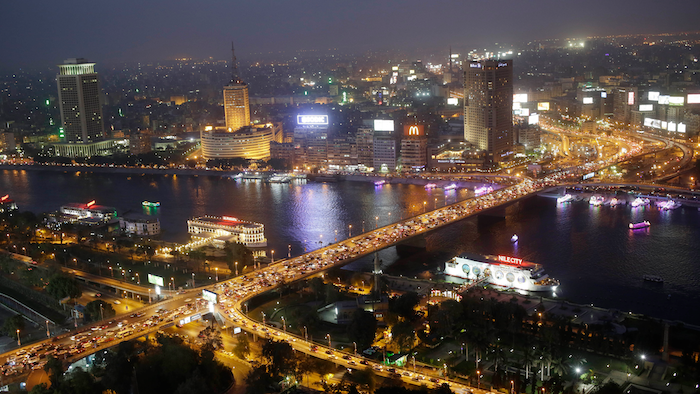 In this Tuesday, May 5, 2015 file photo, rush hour traffic fills the 6 October bridge over the Nile River in Cairo.
AP Photo/Hassan Ammar, File

Uber launched a new minibus service on Tuesday in traffic-mad Cairo, Egypt's capital and one of the U.S. ride-sharing giant's fastest-growing markets.

A part of an aggressive push into emerging countries, the company hopes to draw millions of Egyptians into ride-sharing from chronically congested, pollution-filled urban landscapes and replace personal automobiles. It is already investing $100 million into a Mideast and North Africa customer support center in Cairo.

At a news conference with the famed Pyramids at Giza in the background, CEO Dara Khosrowshahi said the company wants to grow its global number of users from 100 million to 1 billion, and that the new Uber Bus service was part of this plan.

"This is a product that we built for Cairo. It will now be the most affordable way to use Uber technology to get around the city," he said. "I'm especially proud to add that Cairo is the first city globally to be rolling out Uber Bus."

Microbuses — such as the ones Uber plans to use — are notorious in Cairo.

Often over-packed, speeding and veering across traffic lanes with little concern for safety and other drivers, the vehicles are the only affordable method of travel for millions of people in Egypt, where public transport is massively overloaded.

The company hopes that its safety features and feedback model will improve the popular mini-bus form of transport, allowing users to select the closest, quickest routes from convenient pick up spots. It also is introducing a smaller version of its application to run on less advanced mobile phones.

Uber's regional rival, the Dubai-based Careem, said it also launched a microbus service in Cairo similar to Uber's and that it is planning to offer similar services in Saudi Arabia and Pakistan in the future.

Uber drivers have come into conflict with taxis in Egypt, as in other countries. But many in this country of 100 million people say the service provides cleaner vehicles and driver accountability.

Egypt's government also welcomes the company as it helps generate tax revenue by bringing in drivers from the informal economy. Uber says previous regulatory issues have been overcome, as have questions over data privacy raised by reports of Egypt's infamous intelligence agencies seeking continuous access to user information and locations.