The arrest of Nissan chairman Carlos Ghosn could extinguish any remaining hopes for a merger, which the Japanese company's CEO has opposed. 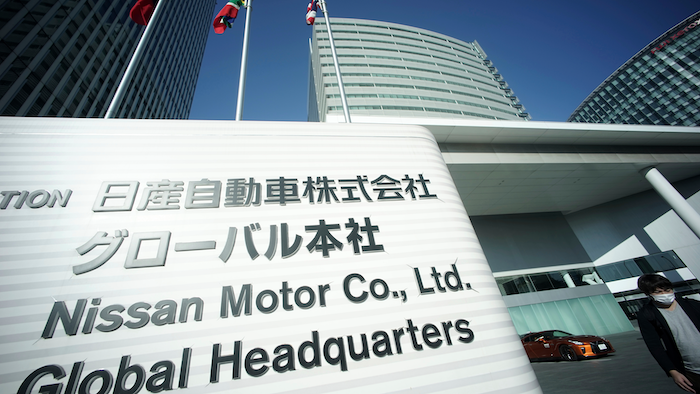 The arrest of Nissan chairman Carlos Ghosn could extinguish any remaining hopes for a merger with key shareholder Renault, which the Japanese company's CEO has publicly opposed.

Ghosn had this year said he was open to the idea of a merger between Nissan and Renault, where he is chief executive and which he has tied into a cost-saving alliance.

But Nissan CEO Hiroto Saikawa has opposed such a move, which would see a Japanese corporate icon come under foreign control. And with the company's board gathering Thursday to decide on ousting Ghosn for alleged financial misconduct, it appears the possibility of a merger may be shelved for good.

"It has been interesting to see Nissan's current CEO Saikawa vocally oppose the idea of a merger," said Max Warburton in an analysis of the scandal. "Now we have Ghosn being defenestrated... It is hard not to conclude that there may be a gulf opening up between Renault and Nissan."

Renault owns 43 percent of Nissan after it helped save the company two decades ago and turned it around under Ghosn's leadership. Nissan owns 15 percent of Renault.

Analysts say the companies are likely to continue their alliance. Besides the financial ties through the share ownership, they share technology, like the basic parts on which vehicles are built, as well as parts purchases. "You can't go back on it that easily," said Masahiro Akita, auto analyst with Credit Suisse.

But the scandal is likely to end speculation of a merger, experts say.

That was clear in the share price of Renault, which Warburton says would have benefited from a Nissan merger. It tanked over 8 percent on Monday when news broke of Ghosn's arrest and has not fully recovered.

Ghosn will be detained for another 10 days as he is questioned over allegedly falsifying income reports by millions of dollars and misusing company assets for personal gain, Kyodo News service reported Wednesday. It cited the Tokyo District Court, which must grant approval for such detentions.

Under Japanese law, suspects can be held for 20 days per possible charge without an official indictment. Additional charges can be tagged on, resulting in longer detentions. Neither Ghosn nor Greg Kelly, another senior Nissan executive who was arrested, has been charged so far.

Ghosn is suspected of under-reporting $44.6 million in income from 2011 to 2015, according to prosecutors.

The maximum penalty, upon conviction for violating finance and exchange laws is 10 years in prison, a 10 million yen ($89,000) fine, or both.

Detainees undergoing interrogation in the Tokyo area are generally held in a center that is separate from the prison for those who have been convicted and sentenced. It is supposed to be nicer than a prison but it is austere with limited access to outside visitors.

Prosecutors have not confirmed where Ghosn is being held.

Westerners are sometimes given better treatment than Japanese in custody, to account for cultural differences, and so it is unclear what kind of conditions Ghosn might be in.

In 2015, Julie Hamp, a Toyota Motor Corp. public relations executive, an American, was arrested on suspicion of importing oxycodone, a narcotic pain killer, into Japan. The drug is tightly controlled in Japan. Police said the drugs were in a parcel Hamp mailed to herself.

She was released from custody after about three weeks of interrogation without charges and she quickly left Japan.

It is unclear that precedence has any relevance to Ghosn's situation because the allegations involve so much money, span a significant period of time, and involve the assets of a major company.

Meanwhile, Renault has decided to retain Ghosn as CEO and that the chief operating officer, Thierry Bollore, would fill in on a temporary basis.

Renault's board also requested that Nissan share details of its internal investigation into Ghosn, which the company says was sparked by a whistleblower.

From the start, Nissan has sought to distance itself from the arrests.

Saikawa denounced Ghosn and Kelly as "the masterminds," and made clear he thought they should be removed at Nissan's board meeting Thursday.

Ghosn, 64, is credited with turning around Nissan from near-bankruptcy after he was sent to Nissan by Renault in 1999. He served as Nissan's chief executive from 2001 until last year. He became chief executive of Renault in 2005, leading the two major automakers simultaneously.

In 2016, he became chairman of Mitsubishi Motors Corp. after Nissan took it into the alliance. Ghosn spearheaded Nissan's lead in the industry in electric cars, with the Nissan Leaf the best-selling electric car.

Kelly, 62, joined Nissan in the U.S. in 1988, and became a board member from 2012. His background over the years has been in human resources and alliance management. He has a law degree from Loyola University School of Law and a bachelor's degree in public administration from Augustana College.

When Saikawa was asked how such actions could have gone undetected for five years, perhaps longer, he blamed a murky system of checks and balances at Nissan and emphasized that he believed Ghosn had too much power.

Despite the arrests, analysts said the impact on Nissan Motor Co.'s auto sales would likely be minimal.

Richter noted sales dips after previous Nissan scandals were temporary. The deviations the automaker acknowledged in those scandals were more directly related to product quality, such as mileage, emissions and plant inspections.

Nissan shares tanked 5.5 percent Tuesday after the scandal surfaced and edged up 0.4 percent on Wednesday.