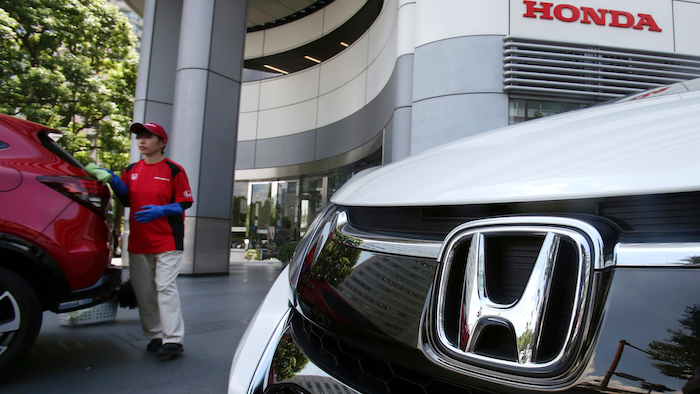 In this July 31, 2018, file photo, an employee of Honda Motor Co. cleans a Honda car displayed at its headquarters in Tokyo.
AP Photo/Koji Sasahara, File

Japanese automaker Honda Motor Co. reported a 21 percent jump in its profit in the last quarter on cost cuts and healthy motorcycle sales.

Tokyo-based Honda, which makes the Fit subcompact, Odyssey minivan and Asimo robot, said Tuesday that its July-September profit of 210.7 billion yen ($1.9 billion), up from 174 billion yen. Quarterly sales edged up nearly 2 percent from a year earlier to 3.84 trillion yen ($34 billion).

Sales of Honda's N-Box series in Japan were strong during the quarter, while truck and Civic sedan sales were solid in the U.S.

Motorcycle sales were strong in India, Vietnam and Indonesia, and production was expanded at a plant in India.

The HondaJet also did well, being the most delivered aircraft in its class for the first half of this year, it said.

The manufacturer is forecasting a fall in profit for the fiscal year through March by 36 percent from the previous fiscal year to 675 billion yen ($6.0 billion).

Honda's annual profit soared nearly 72 percent to 1.06 trillion yen ($9.7 billion) in the previous fiscal year, helped by a reduction of corporate tax rates in the U.S.

The latest profit forecast is still more upbeat than the projection given before by 60 billion yen ($532 million).