Tesla said it recorded one accident for every 3.34 million miles driven when the autopilot was engaged. 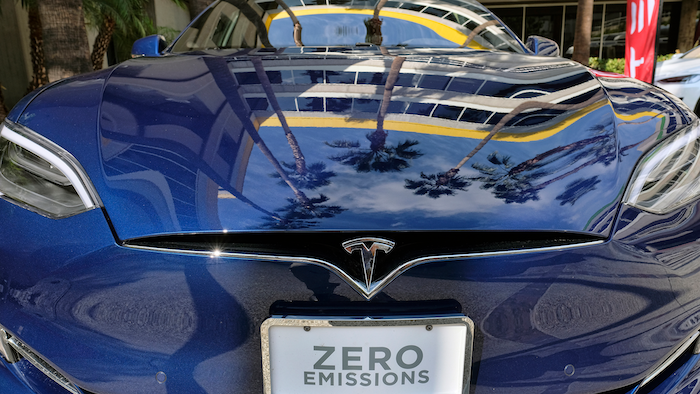 In this Oct. 24, 2016, file photo, palm trees are reflected on the hood of a Tesla Model S on display in downtown Los Angeles.
AP Photo/Richard Vogel, File

When it's machine versus man, it's more likely you'll be exchanging insurance information with man, according to data released by the electric-car maker Tesla.

In the first quarterly report on the safety of its autonomous vehicles, Tesla said it recorded one accident for every 3.34 million miles driven when the autopilot was engaged. That is a vastly better record than the one compiled by humans.

The most recent National Highway Traffic Safety Administration data shows one auto crash for every 492,000 miles driven in the U.S. without an autonomous assist.

In Tesla cars that do not have the autopilot engaged, the company said it recorded one accident or crash-like event every 1.92 million miles.

The crash of any autonomous Tesla vehicle receives intense coverage due to the fascination over the confluence of technology and man, and also fascination with the company's CEO, Elon Musk.

Musk has grown agitated over that coverage.

After a Model S collided with a firetruck this spring in Utah and the driver suffered a broken ankle, Musk tweetedthat "It's super messed up that a Tesla crash resulting in a broken ankle is front page news and the (tilde)40,000 people who died in US auto accidents alone in past year get almost no coverage."

"Early Friday, Tesla put the brakes on the autonomous features of its latest software, called "Version 9.

The technology is intended to allow autonomous technology to take over a vehicle to pass cars on highways, and also handle highway entrances and exits.

Musk said in an early morning tweet that the software is being released widely right now, but that the autopilot functions will undergo a few more weeks of testing.