The Super White Shark can reportedly reach a top speed of more than 400 mph.

Looking more like a flying saucer from a 1950s sci-fi flick, the Super White Shark can reportedly reach a stop speed of over 400 mph, with a flight range of just over 1,800 miles and a ceiling of just under 20,000 feet. The developer claims to have been inspired by some of the leading combat helicopters currently in use, but offers what it describes as “a revolutionary design that perfects wing-body-fusion technology.”

For those with a less profound engineering background, apparently wing-body-fusion technology in the aerospace sector means ... round.

While the Super White Shark does offer a truly unique name, this approach to aircraft design is nothing new. The U.S. experimented with a ducted-fan design in the early 1960s. The round body housed a collection of internal propellers that provided lift. Dubbed the Avrocar, concepts only made it three feet off the ground, but in posing as a possible combination of a helicopter and jeep, it could reach speeds of up to 35 mph.  The project was scrapped after the concept posed no real aviation benefits.

But China says their armed version, with its two turbojet engines, was designed for the "future digital information battlefield."

The Super Great White Shark measures about 25 feet long and 10 feet high, with room for a two-person crew. From a more technical engineering perspective, the rounded design could legitimately enhance its stealth capabilities.

Of course, that will only be known once this concept aircraft actually takes flight — which it hasn’t. But the Chinese government has stated it could be ready for takeoff by next year. 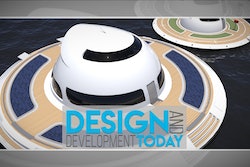