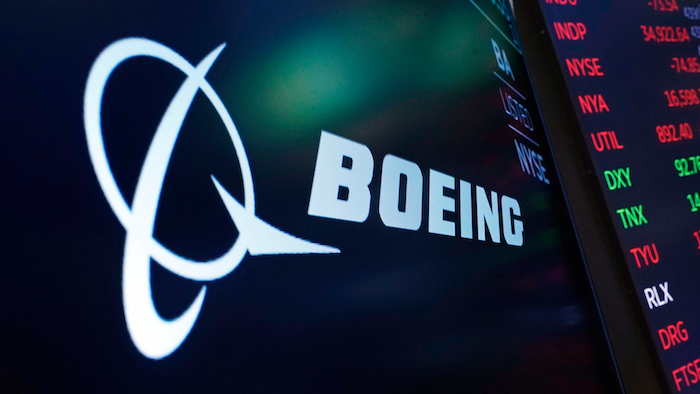 In this July 13, 2021, photo, the logo for Boeing appears on a screen above a trading post on the floor of the New York Stock Exchange. Boeing Co., a leading defense contractor and one of the world's two dominant manufacturers of airline planes, is expected to move its headquarters from Chicago to the Washington, D.C., area, according to two people familiar with the matter. The decision could be announced as soon as later Thursday, May 5, 2022, according to one of the people.
AP Photo/Richard Drew, File

Boeing Co. said Thursday it will move its headquarters from Chicago to the Washington, D.C., area, where company executives would be closer to key federal government officials.

The company said it will use its campus in Arlington, Virginia, as the new headquarters, and it plans to develop a research and technology hub in the area.

“The region makes strategic sense for our global headquarters given its proximity to our customers and stakeholders, and its access to world-class engineering and technical talent,” Boeing CEO David Calhoun said.

The move marks a win for Virginia’s Republican Gov. Glenn Youngkin, who campaigned last year on a promise to bring new jobs to the state.

Youngkin, who retired in 2020 as co-CEO of private equity giant the Carlyle Group, was personally involved in discussions about the move and had a prior business relationship with Boeing CEO David Calhoun, according to a person familiar with the matter who was not authorized to discuss the negotiations publicly.

Boeing is a major defense contractor, and the move will put executives close to Pentagon leaders. Rival defense contractors including General Dynamics, Lockheed Martin and Northrop Grumman are already based in the D.C. area.

Company executives would also be near the Federal Aviation Administration, which certifies Boeing passenger and cargo planes.

Boeing's relationship with the FAA has been strained since deadly crashes of its best-selling plane, the 737 Max, in 2018 and 2019. The FAA took nearly two years — far longer than Boeing expected — to approve design changes and allow the plane back in the air. Certification of new Boeing planes will take longer too.

The company has suffered financial setbacks in building a refueling tanker for the Air Force. And it has been hurt by the pandemic, which undercut travel and demand for new planes. Boeing lost $1.2 billion in this year's first quarter.

Boeing's roots are in the Seattle area, and it has assembly plants in Washington state and South Carolina. The company moved its headquarters to Chicago in 2001 after an unusually public search that also considered Dallas and Denver.

Cai von Rumohr, an aerospace analyst for Cowen, said there were advantages for Boeing moving its headquarters to the Washington, D.C., area — or back to Seattle, where leaders again would be closer to the company’s important commercial operations.

“Chicago does nothing for them,” von Rumohr said.

Boeing had 142,000 employees at the end of 2021, including 12% based outside the United States, according to a regulatory filing. The filing did not say how many work in Chicago.

In Virginia, Democratic state Senate Majority Leader Dick Saslaw said he had not been advised of the move. But if the deal is completed, he said, it would be “one hell of a catch” for the state.

Boeing will be following in the footsteps of Amazon, which decided to put a second headquarters in Arlington. Last month, local officials approved Amazon's plans to erect a 350-foot helix-shaped building.