It will be Wing’s first commercial expansion in the U.S. 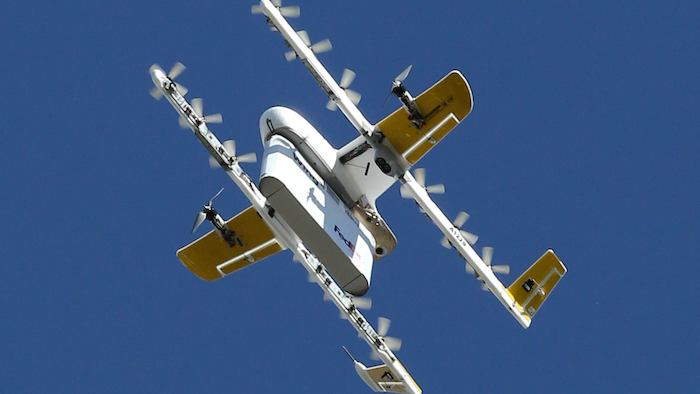 A Wing drone hovers before lowering a package to the ground by tether, Christiansburg Va., Oct. 18, 2019.
Matt Gentry/The Roanoke Times via AP, File

Walgreens will begin flying packages by drone to residents in a pair of Texas cities in partnership with Google’s drone-making affiliate, Wing.

The companies said they will begin testing the service next week in the city of Frisco and neighboring Little Elm, two fast-growing communities north of Dallas where road traffic is “probably the biggest complaint we get," said Frisco Mayor Jeff Cheney.

“Every delivery made by drone is taking a delivery vehicle off our roads," Cheney said.

It will be Wing’s first commercial expansion in the U.S. after years testing the concept in a Virginia town and parts of Australia and Finland. The drone company is a subsidiary of Google’s corporate parent, Alphabet.

Rivals including Amazon, Walmart and UPS have all sought to get drone delivery fleets off the ground but the projects face numerous technical and regulatory challenges. There’s also not much evidence that American consumers have been clamoring for airlifted packages, and many have expressed privacy, safety or nuisance concerns when asked to imagine the noisy machines over their homes.

Walgreens says about 100 store items will be available for air delivery when the service rolls out in Texas in the coming months, including over-the-counter medication, snacks and cosmetics. Store employees will be tasked with taking online orders and then loading the purchased items onto one of a small number of Wing's 10-pound drones.

The drones are able to navigate autonomously — though a human pilot can also control them remotely — and are powered by two forward propellers on their wings and 12 smaller vertical propellers. A tether releases to drop the package onto a front lawn.

Wing expects most customers to be in the single-family homes that dominate the area, though it has delivered to apartment buildings in Europe.

“It’s got very advanced planning and routing capabilities so for each flight, the system does millions of simulations to get the best route," Bass said. “It can navigate to a very specific location."

The first phase of the initiative will operate out of the parking lot of a single Walgreens store in a shopping center near the border of Little Elm and Frisco. Wing says the drones will be able to serve thousands of people within a 4-mile radius of the store.

Wing's biggest delivery service so far has been in the Australian city of Logan, where the company says it made about 50,000 drone deliveries in the first eight months of this year. A smaller pilot with Walgreens started in 2019 in sparsely populated neighborhoods of Christiansburg, Virginia.

Frisco, which grew from about 6,000 people in 1990 to about 200,000 last year, has pitched itself as a testing ground for new modes of transport such as self-driving cars and Uber's flying taxis. Cheney said he doesn't expect many complaints about drone noise or safety.

Federal officials started rolling out new rules in mid-April to allow operators to fly small drones over people and at night, potentially giving a boost to commercial use of the machines. Wing says its Texas service will be limited to daytime hours for now.