Officials called it a major milestone in sending astronauts back to the moon. 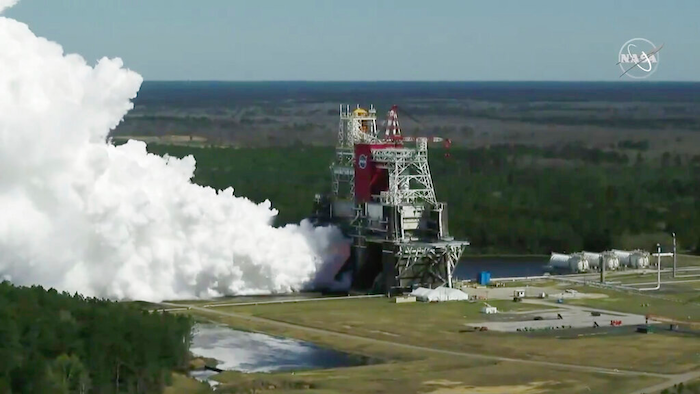 Image from video of the core stage of the Space Launch System tested at Stennis Space Center near Bay St. Louis, Miss., March 18, 2021.
NASA via AP

This time, the four main engines of the rocket’s core stage remained ignited for the full eight minutes. Applause broke out in the control room at Mississippi's Stennis Space Flight Center once the engines shut down on the test stand.

NASA officials called it a major milestone in sending astronauts back to the moon, but declined to say when that might occur or even whether the first test flight without a crew would occur by year's end as planned.

John Honeycutt, NASA's program manager for the Space Launch System or SLS rocket, said everything seemed to go well in Thursday's test firing. “The core stage ... got an A-plus today,” he told reporters.

During the first test, the engines fired for just a minute, automatically cut short by strict test limits that were relaxed for the redo. Valve issues also had to be resolved prior to Thursday's countdown.

With this critical test finally finished — and assuming everything went well — NASA can now send the rocket segment to Florida's Kennedy Space Center to prepare it for launch.

Noting they're taking it one step at a time, officials declined to say whether this first SLS launch will occur by year's end as had been planned or will bump into 2022. The SLS rocket will send an empty Orion capsule to the moon and back.

The four engines tested Thursday actually flew into orbit on NASA's space shuttles and were upgraded for the more powerful SLS system. The orange core stage is reminiscent of the shuttle's external fuel tank, which held the liquid hydrogen and oxygen that fed the main engines.

The Trump administration had pressed for a moon landing by astronauts by 2024, a deadline increasingly difficult if not impossible to achieve at this point. The current White House has yet to issue a revised timeline.

NASA Acting Administrator Steve Jurczyk said the space agency is conducting an internal study to determine a schedule for the astronaut moon landings — “what we can optimally do” based on budgets. The review will take a few months, he noted.