A team of engineers measured the precise origin of the sound generated by flapping wings for the first time. 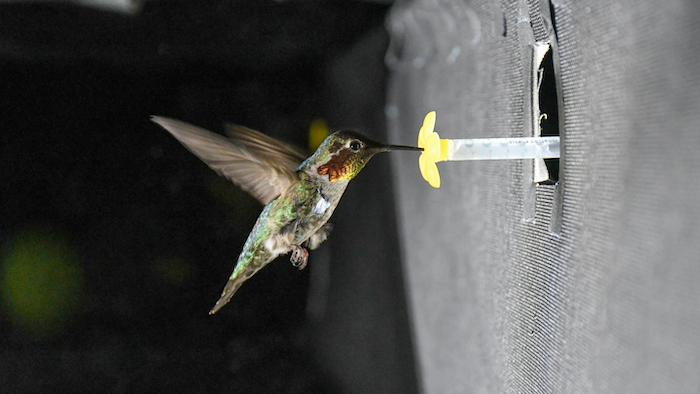 The hummingbird is named after its pleasant humming sound when it hovers in front of flowers to feed. But only now has it become clear how the wing generates the hummingbird's namesake sound when it is beating rapidly at 40 beats per second. Researchers from Eindhoven University of Technology, Sorama, a TU/e spin-off company, and Stanford University meticulously observed hummingbirds using 12 high-speed cameras, 6 pressure plates and 2176 microphones. They discovered that the soft and complex feathered wings of hummingbirds generate sound in a fashion similar to how the simpler wings of insect do. The new insights could help make devices like fans and drones quieter.

The team of engineers succeeded in measuring the precise origin of the sound generated by the flapping wings of a flying animal for the first time. The hummingbird's hum originates from the pressure difference between the topside and underside of the wings, which changes both in magnitude and orientation as the wings flap back and forth. These pressure differences over the wing are essential, because they furnish the net aerodynamic force that enables the hummingbird bird to liftoff and hover.

Unlike other species of birds, a hummingbird wing generates a strong upward aerodynamic force during both the downward and upward wing stroke, so twice per wingbeat. Whereas both pressure differences due to the lift and drag force acting on the wing contribute, it turns out that the upward lifting pressure difference is the primary source of the hum.

The difference between whining, humming, buzzing and whooshing

Professor David Lentink of Stanford University: "This is the reason why birds and insects make different sounds. Mosquitoes whine, bees buzz, hummingbirds hum, and larger birds "whoosh." Most birds are relatively quiet because they generate most of the lift only once during the wingbeat at the downstroke. Hummingbirds and insects are noisier because they do so twice per wingbeat."

The researchers combined all measurements in a 3D acoustic model of bird and insect wings. The model not only provides biological insight into how animals generate sound with their flapping wings, it also predicts how the aerodynamic performance of a flapping wing gives the wing sound its volume and timbre. "The distinctive sound of the hummingbird is perceived as pleasant because of the many 'overtones' created by the varying aerodynamic forces on the wing. A hummingbird wing is similar to a beautifully tuned instrument," Lentink explains with a smile.

To arrive at their model, the scientists examined six Anna's hummingbirds, the most common species around Stanford. One by one, they had the birds drink sugar water from a fake flower in a special flight chamber. Around the chamber, not visible to the bird, cameras, microphones and pressure sensors were set up to precisely record each wingbeat while hovering in front of the flower.

You can't just go out and buy the equipment needed for this from an electronics store. CEO and researcher Rick Scholte of Sorama, a spin-off of TU Eindhoven: "To make the sound visible and be able to examine it in detail, we used sophisticated sound cameras developed by my company. The optical cameras are connected to a network of 2176 microphones for this purpose. Together they work a bit like a thermal camera that allows you to show a thermal image. We make the sound visible in a 'heat map', which enables us to see the 3D sound field in detail."

To interpret the 3D sound images, it is essential to know what motion the bird's wing is making at each sound measurement point. For that, Stanford's twelve high-speed cameras came into play, capturing the exact wing movement frame-by-frame.

Lentink: "But that's not end of story. We also needed to measure the aerodynamic forces the hummingbird's wings generates in flight. We had to develop a new instrument for that." During a follow-up experiment six highly sensitive pressure plates finally managed to record the lift and drag forces generated by the wings as they moved up and down, a first.

The terabytes of data then had to be synchronized. The researchers wanted to know exactly which wing position produced which sound and how this related to the pressure differences. Scholte: "Because light travels so much faster than sound, we had to calibrate each frame separately for both the cameras and the microphones, so that the sound recordings and the images would always correspond exactly." Because the cameras, microphones and sensors were all in different locations in the room, the researchers also had to correct for that.

Algorithm as a composite artist

Once the wing location, the corresponding sound and the pressure differences are precisely aligned for each video frame, the researchers were confronted with the complexity of interpreting high volume data. The researchers tackled this challenge harnessing artificial intelligence, the research of TU/e PhD student, and co-first author, Patrick Wijnings.

Wijnings: "We developed an algorithm for this that can interpret a 3D acoustic field from the measurements, and this enabled us to determine the most probable sound field of the hummingbird. The solution to this so-called inverse problem resembles what a police facial composite artist does: using a few clues to make the most reliable drawing of the suspect. In this way, you avoid the possibility that a small distortion in the measurements changes the outcome."

The researchers finally managed to condense all these results in a simple 3D acoustic model, borrowed from the world of airplanes and mathematically adapted to flapping wings. It predicts the sound that flapping wings radiate, not only the hum of the hummingbird, but also the whoosh of other birds and bats, the buzzing and whining of insects and even the noise that robots with flapping wings generate.

Although it was not the focus of this study, the knowledge gained may also help improve aircraft and drone rotors as well as laptop and vacuum cleaner fans. The new insights and tools can help make engineered devices that generate complex forces like animals do quieter.

This is exactly what Sorama aims to do: "We make sound visible in order to make appliances quieter. Noise pollution is becoming an ever-greater problem. And a decibel meter alone is not going to solve that. You need to know where the sound comes from and how it is produced, in order to be able to eliminate it. That's what our sound cameras are for. This hummingbird wing research gives us a completely new and very accurate model as a starting point, so we can do our work even better," concludes Scholte.