And it's likely more are much closer. 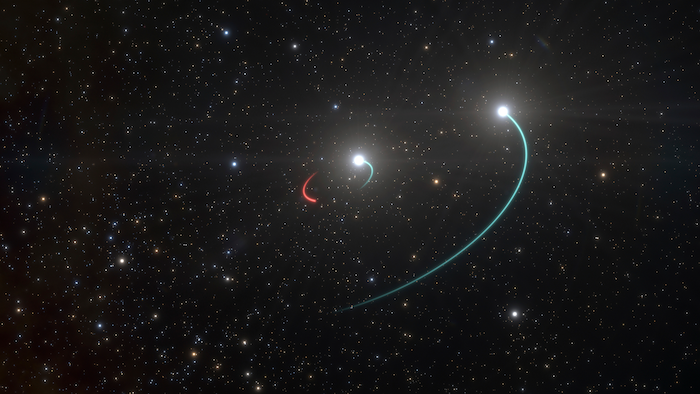 This May 2020 illustration shows the orbits of the objects in the HR 6819 triple system.
L. Calçada/ESO via AP

Meet your new but shy galactic neighbor: A black hole left over from the death of a fleeting young star.

European astronomers have found the closest black hole to Earth yet, so near that the two stars dancing with it can be seen by the naked eye.

Of course, close is relative on the galactic scale. This black hole is about 1,000 light-years away and each light-year is 5.9 trillion miles (9.5 trillion kilometers). But in terms of the cosmos and even the galaxy, it is in our neighborhood, said European Southern Observatory astronomer Thomas Rivinius, who led the study published Wednesday in the journal Astronomy & Astrophysics.

The previous closest black hole is probably about three times further, about 3,200 light-years, he said.

The discovery of a closer black hole, which is in the constellation Telescopium in the Southern Hemisphere, hints that there are more of these out there. Astronomers theorize there are between 100 million to 1 billion of these small but dense objects in the Milky Way.

The trouble is we can’t see them. Nothing, not even light, escapes a black hole’s gravity. Usually, scientists can only spot them when they're gobbling up sections of a partner star or something else falling into them. Astronomers think most black holes, including this newly discovered one, don't have anything close enough to swallow. So they go undetected.

Astronomers found this one because of the unusual orbit of a star. The new black hole is part of what used to be a three-star dance in a system called HR6819. The two remaining super-hot stars aren't close enough to be sucked in, but the inner star's orbit is warped.

Using a telescope in Chile, they confirmed that there was something about four or five times the mass of our sun pulling on the inner star. It could only be a black hole, they concluded.

Outside astronomers said that makes sense.

“It will motivate additional searches among bright, relatively nearby stars,” said Ohio State University astronomer Todd Thompson, who wasn’t part of the research.

Like most of these type of black holes this one is tiny, maybe 25 miles (40 kilometers) in diameter.

“Washington, D.C. would quite easily fit into the black hole, and once it went in it, would never come back,” said astronomer Dietrich Baade, a study co-author.

These are young hot stars compared to our 4.6 billion-year-old sun. They’re maybe 140 million years old, but at 26,000 degrees F (15,000 degrees C) they are three times hotter than the sun, Rivinius said. About 15 million years ago, one of those stars got too big and too hot and went supernova, turning into the black hole in a violent process, he said.

“It is most likely that there are black holes much closer than this one,” said Avi Loeb, director of Harvard’s Black Hole Initiative, who wasn’t part of the study. “If you find an ant while scanning a tiny fraction of your kitchen, you know there must be many more out there.”