The 4-pound, solar-powered Ingenuity will be deployed to the red planet this summer. 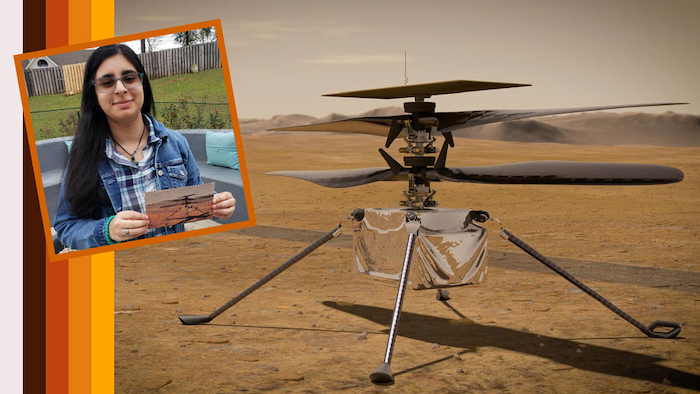 Vaneeza Rupani (inset), a junior at Tuscaloosa County High School in Northport, Ala., and an artist's impression of NASA's Mars helicopter.
NASA/JPL-Caltech/NIA/Rupani family

NORTHPORT, Ala. (AP) — An Alabama high school student named NASA’s first Mars helicopter that will be deployed to the red planet later this summer.

Ingenuity, the name submitted by Vaneeza Rupani, was selected for the 4 pound (1.8 kilograms) solar-powered helicopter, NASA said in a statement on Wednesday. The name coined by the junior at Tuscaloosa County High School in Northport was just one of 28,000 names submitted in NASA’s “Name the Rover” essay contest for K-12 students across the United States.

“The ingenuity and brilliance of people working hard to overcome the challenges of interplanetary travel are what allow us all to experience the wonders of space exploration,” Rupani wrote in her essay. “Ingenuity is what allows people to accomplish amazing things, and it allows us to expand our horizons to the edges of the universe.”

In March, the space agency selected the name Perseverance for the Mars Rover based on a Virginian student’s essay, but decided to come back to the submitted essays to also pick a name for the helicopter that will accompany the Rover.

“It was really cool I got to be a part of something like this,” she told the AP.

Ingenuity has already completed testing in a NASA simulation chamber in Southern California. Next, it will be attached to the belly of the Perseverance, which will take off for Mars in July or August. After it arrives on the red planet, the helicopter will remain under a protected covering to protect it from debris until the timing is right for the aircraft to be deployed.

It will then have a 31-day flight window to prove that powered flights can be accomplished on Mars, NASA said.

This year’s mission is part of a program that also includes missions to the moon to prepare for a possible human exploration of Mars. NASA plans to land the first woman and the next man on the moon in 2024, and set up a continued human presence “on and around” the moon in eight years so they can use it to send astronauts to Mars.