Boeing plans to use the flat desert grassland to land its new reusable space capsule. 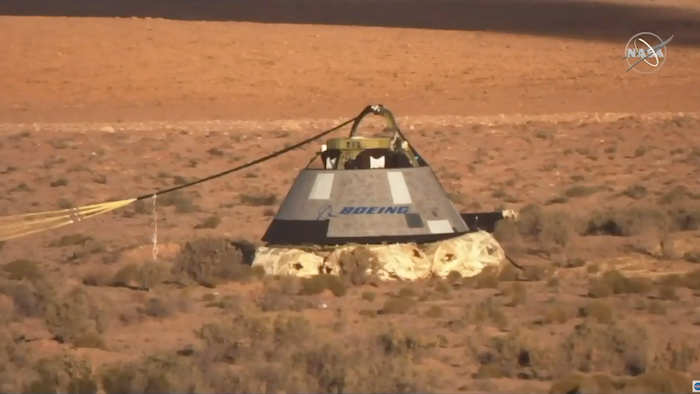 In this image made from a video provided by NASA the Starliner capsule rests on the ground after a test of Boeing's crew capsule launch abort system in White Sands Missile Range in N.M., on Monday, Nov. 4, 2019. Cochise County Arizona officials are hearing about possible emergency responses and road closures that might be required if the new reusable space capsule lands by parachute on a flat desert grassland.
NASA via AP

BISBEE, Ariz. (AP) — Cochise County officials don’t have to consider possible emergency responses or road closures when thousands of migratory birds drop in on the Willcox Playa every year.

Not so with Boeing Corp.’s plan to use the flat desert grassland in southeastern Arizona as one of five preferred landing sites in four states for its new reusable space capsule.

Members of the county Board of Supervisors briefed Tuesday by Boeing representatives and county officials about the plan were told that parts such as heat shield doors might be jettisoned from the parachuting capsule and that a Boeing contractor would clean up hazardous materials.

Also, roads in the area might have to be closed with dozens of sheriff’s deputies and other law enforcement officers being deployed to secure the landing site. Viewing areas would be designated for VIPs and the media, and an ambulance would be on standby.

County spokeswoman Amanda Baillie told the Arizona Daily Star that the county is working with Boeing regarding the reimbursement of the county’s costs for the Starliner project.

Briefing material said up to 100,000 people from outside the area might show up to observe the landing.

The winter habitat for thousands of sandhill cranes, the Willcox Playa site is located about 65 miles (105 kilometers) east of Tucson and 345 miles (555 kilometers) west of El Paso, Texas, on land owned by the U.S. Army and the federal Bureau of Land Management.

Boeing says the Starliner could land at Willcox Playa or at several military sites: Dugway Proving Ground in Utah, Edwards Air Force Base in Southern California or at two sites in White Sands Missile Range in New Mexico.

Weather conditions, particularly winds, will be a major factor in determining what landing site is used, said Marty Linde, Boeing’s manager of landing and recovery.

Linde said Willcox Playa is attractive because it provides a flat surface for landing for the Starliner, the Herald-Review reported.

“I’m amazed at the Playa,” Linde said. “What a piece of cake this is going to be.”

With a “nominal” landing under normal circumstances, the landing would be planned months in advance. But an in-space emergency situation could provide only a few hours of notice, according to briefing documents.

Being developed by Boeing under a NASA contract, the Starliner on Nov. 4 made a safety test flight at White Sands, shooting nearly a mile (1,300 meters) into the air before parachuting back to the ground.

An orbital test flight from Cape Canaveral in Florida to the International Space Station with a dummy and some cargo on board is planned Dec. 17. If it goes well, a crew test flight would follow.