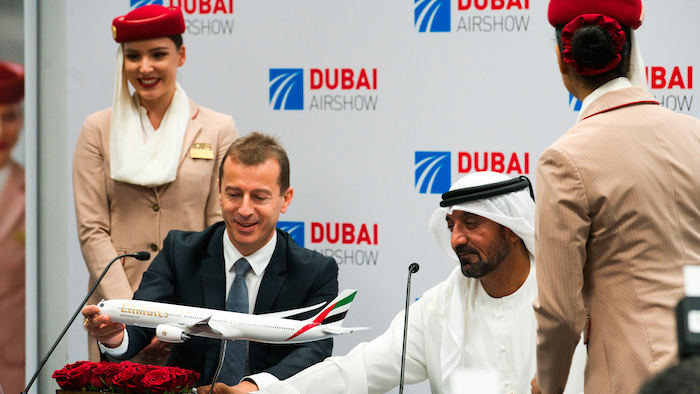 DUBAI, United Arab Emirates (AP) — Airbus nailed down $30 billion in new plane orders on the second day of the Dubai Airshow after previous rounds of the biennial showcase saw its competitor Boeing take the lion’s share of deals.

The largest deal came from the Middle East’s biggest carrier, the Dubai-based Emirates, which announced it would be buying 20 additional wide-body Airbus A350s, bringing its total order for the aircraft to 50 in an agreement worth $16 billion at list price. That deal, however, replaces a $21.4 billion agreement struck in February to purchase 70 Airbus aircraft, which had included 40 of the A330neo. Delivery is slated to start in 2023.

In another big announcement for Airbus, Emirati budget carrier Air Arabia said it would be purchasing 120 new Airbus planes in a deal worth $14 billion at list price.

Air Arabia, which operates mainly out of the emirate of Sharjah, already has a fleet entirely made up of Airbus. The new deal will include 73 A320neos, 27 A321neos and 20 A321 XLRs, with first delivery in 2024.

It comes as one of the country’s main carriers, Abu Dhabi Etihad Group, announced recently a joint venture with Air Arabia to launch Air Arabia Abu Dhabi, the first low-cost airline based in Abu Dhabi.

Boeing, meanwhile, has used the public appearances of its executives the airshow to stress the company’s commitment to safety after two plane crashes killed nearly 350 people after take-off from Indonesia in October of last year and from Ethiopia in March. The aircraft’s automated flight-control system played a part in pushing the planes' noses down until the jets plummeted.

The crashes forced the grounding of Boeing’s 787 Max fleet around the world. The company is now working to meet a self-imposed deadline for U.S. regulatory approval of changes to the aircraft and the training of pilots to get it flying again by January.

Despite its troubles, the Max won a vote of confidence from at least one buyer at the airshow. Turkey’s SunExpress announced a purchase of 10 additional 737-8 Max jets, bringing its overall order of the plane to 42. The deal is valued at $1.2 billion, but it’s likely the airline will negotiate for a better deal as Boeing talks to airlines about compensations for the grounding of the aircraft and reaches settlements with relatives of victims who perished.

“We have full confidence that Boeing will deliver us a safe, reliable and efficient aircraft,” CEO of SunExpress Jens Bischof said. “This requires the undisputed airworthiness of the model... Our utmost priority at SunExpress is and has always been safety.”

The airline is based in the Turkish coastal city of Antalya and jointly owned by Turkish Airlines and Lufthansa.

It’s not the first major order for the jet since its grounding. In June, a mere two months after the second Max jet crashed, one of the world's largest airline groups — IAG — announced its intention to purchase 200.

Meanwhile, Boeing touted its partnership with Abu Dhabi’s flagship carrier Etihad Airways on Monday as the companies unveiled one of the world’s most fuel-efficient long-haul airplanes. It comes as Etihad seeks to save costs on fuel and position itself as a more environmentally-conscious choice for travelers.

Etihad’s “Greenliner” is a Boeing 787 Dreamliner that will depart on its first route from Abu Dhabi to Brussels in January 2020. Etihad’s CEO Tony Douglas described the aircraft as a flying laboratory for testing that could benefit the entire industry.

With fuel costs eating up around a quarter of airline spending, Douglas said the goal of the Greenliner is to be 20% more fuel efficient than other aircraft in Etihad’s fleet.

“This is not just a box-ticking exercise,” he said at the unveiling of the initiative at the Dubai Airshow.

Douglas said the aircraft “not only makes sense economically from a profit and loss account point of view, but because it also directly impacts the CO2 because of the fuel burn.”

Etihad has reported losses of $4.75 billion since 2016 as its strategy of aggressively buying stakes in airlines from Europe to Australia exposed the company to major risks.

Despite its financials, the airline continues to be among the most innovative.

This year, Etihad flew the world’s first passenger flight using sustainable biofuel made from a plant that grows in saltwater. It also became the first in the Middle East to operate a flight without any single-use plastics on board.

The Greenliner will be the only aircraft of its kind in Etihad’s fleet. The company currently has 36 of the 787 Dreamliners with plans to operate 50.

“This is a small step today, but in a very, very long journey,” Douglas said.

Aviation accounts for a small but rapidly growing share of greenhouse-gas emissions — about 2.5% worldwide. But forecasters expect air travel to grow rapidly in the coming years.

There’s a small but growing movement in Europe and North America that’s shunning air travel because it produces high levels of greenhouse gas emissions. The trend is most prominent in Sweden, where the likes of teen climate activist Greta Thunberg have challenged travelers to confront the huge carbon cost of flying.

Some campaigners are also “flight shaming” travelers for their carbon footprint. Most recently, Prince Harry and his wife Meghan were criticized for flying on private jets this summer while calling for more action on climate change.