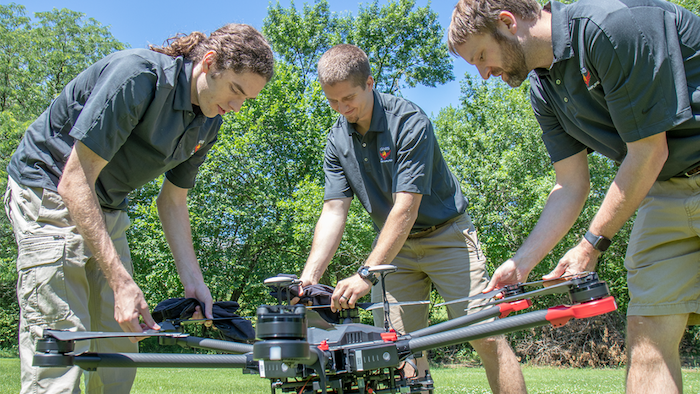 Evan Beachly (from left), Jim Higgins and Carrick Detweiler assemble a drone system before taking it for a test flight.
Alyssa Amen/NUtech Ventures, University of Nebraska-Lincoln

The university on Monday announced the new business venture, Drone Amplified, which is headed by Carrick Detweiler, an associate professor of computer science and engineering.

The company's drone-mounted technology carries chemical spheres the size of pingpong balls. At the press of a button, the spheres ignite, intentionally sparking small fires to burn vegetation and deprive incoming wildfires of potential fuel.

The drones can also be equipped with thermal cameras to help spot hotspots, and they can be used in situations that are unsafe for manned aircraft, such as low-visibility nighttime operations.

University researchers tested the technology in 2016 with a controlled fire at the Homestead National Monument of America near Beatrice.