The milestone was previously put on hold after a suit-sizing flap led to an embarrassing cancellation. 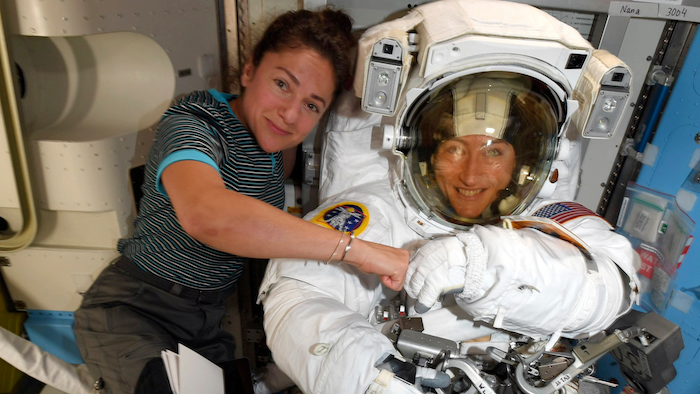 In this image released Friday, Oct. 4, 2019, by NASA, astronauts Christina Koch, right, and, Jessica Meir pose on the International Space Station. The first all-female spacewalk is back on, six months after a flap over spacesuits led to an embarrassing cancellation. NASA announced Friday that the two U.S. astronauts aboard the International Space Station will pair up for a spacewalk later this month.
NASA via AP

CAPE CANAVERAL, Fla. (AP) — The first all-female spacewalk is back on, six months after a suit-sizing flap led to an embarrassing cancellation.

NASA announced Friday that the International Space Station's two women will pair up for a spacewalk later this month. Astronauts Christina Koch and the newly arrived Jessica Meir will venture out Oct. 21 to plug in new, upgraded batteries for the solar power system.

It will be the fourth of five spacewalks for battery work. The first is Sunday; Koch will go out with Andrew Morgan.

Koch was supposed to do a spacewalk with another female crewmate in March. But NASA had to scrap the plan just a few days in advance because there wasn't enough time to get a second medium-size spacesuit ready. The second medium was put together on board in June.

NASA's deputy chief astronaut Megan McArthur told reporters the all-female spacewalk will be a milestone. But she noted that women are so integrated at all levels at NASA now that they don't tend to dwell on gender.

"I'm sure that they'll sit back and reflect on it, as we all will. We will all celebrate that," McArthur said.

Koch and Meir, a marine biologist who arrived at the orbiting lab last week, are both members of NASA's Astronaut Class of 2013, the first and only one with an even split between men and women. They're also both making their first spaceflights.

Koch, an electrical engineer, is more than 200 days into an approximately 300-day mission, which will set a record for the longest single spaceflight by a woman.

"In the past, women haven't always been at the table," Koch said during a televised interview earlier this week. "And it's wonderful to be contributing to the human spaceflight program at a time when all contributions are being accepted, when everyone has a role, and that can lead, in turn, to increased chance for success."

Since the world's first spacewalk in 1965, only 14 women have done them, versus 213 men, according to NASA.

Expect more women spacewalking together on the horizon.

"It turns out that over the next couple years, we're having a lot of medium suit people fly," said NASA's space station program manager, Kirk Shireman.

Koch will serve as the lead spacewalker for Sunday's excursion with Morgan, her U.S. male crewmate. There are 11 spacewalks coming up in the next few months — 10 U.S. and one Russian. Only one is two women. 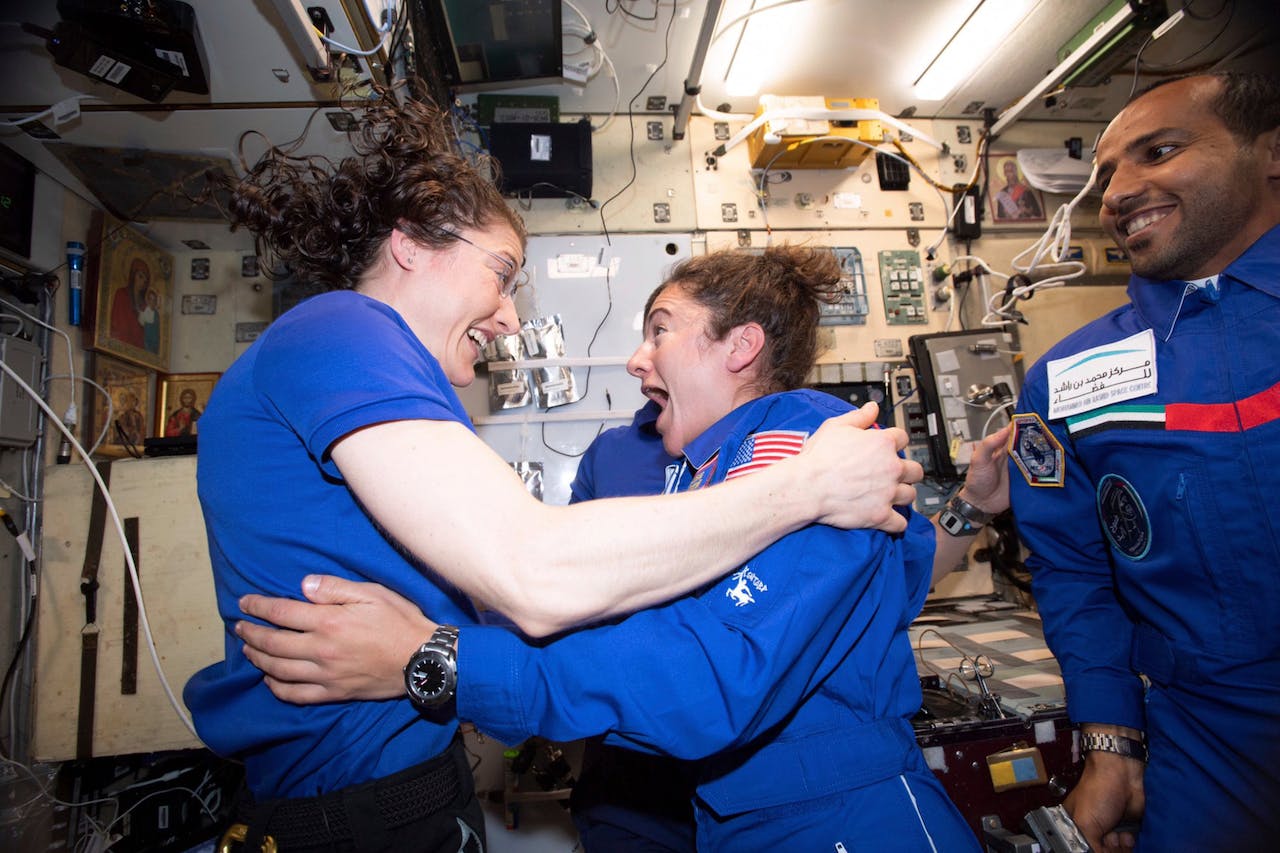 In this photo made available by NASA astronaut Jessica Meir on Sept. 29, 2019, Christina H. Koch, left, and Meir greet each other after Meir's arrival on the International Space Station. On Friday, Sept. 4, 2019, NASA announced that the International Space Station’s two women will pair up for a spacewalk on Oct. 21 to plug in new batteries.NASA via AP