The employees lost their belongings, but kept their lives. 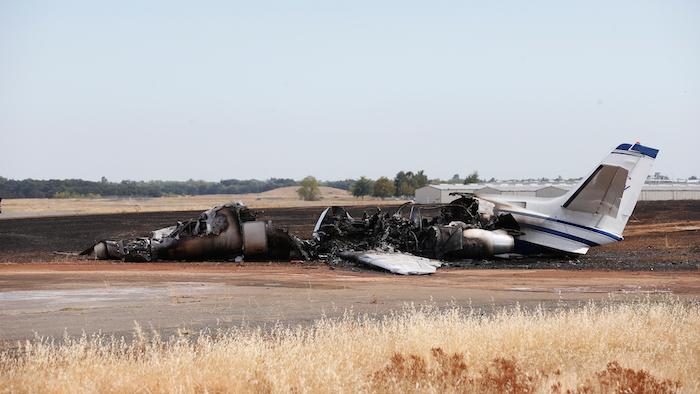 The burned out remains of a twin-engine Cessna Citation sits at the end of a runway after the pilot aborted the takeoff at the Oroville Airport in Oroville, Calif., Wednesday, Aug. 21, 2019. The plane carried two pilots and eight passengers, who all escaped injury. Firefighters were able to quickly control a grass fire that broke out and temporarily closed Highway 162. No cause of the crash has been listed.
AP Photo/Rich Pedroncelli

SAN FRANCISCO (AP) — Eight executives of an Atlanta-based package company were among the 10 people who escaped when a plane burst into flames at a small Northern California airport, a company spokeswoman said Thursday.

The twin-engine Cessna Citation jet aborted its takeoff, went off the runway and burst into flames Wednesday at the Oroville Municipal Airport, about 70 miles (110 kilometers) north of Sacramento. 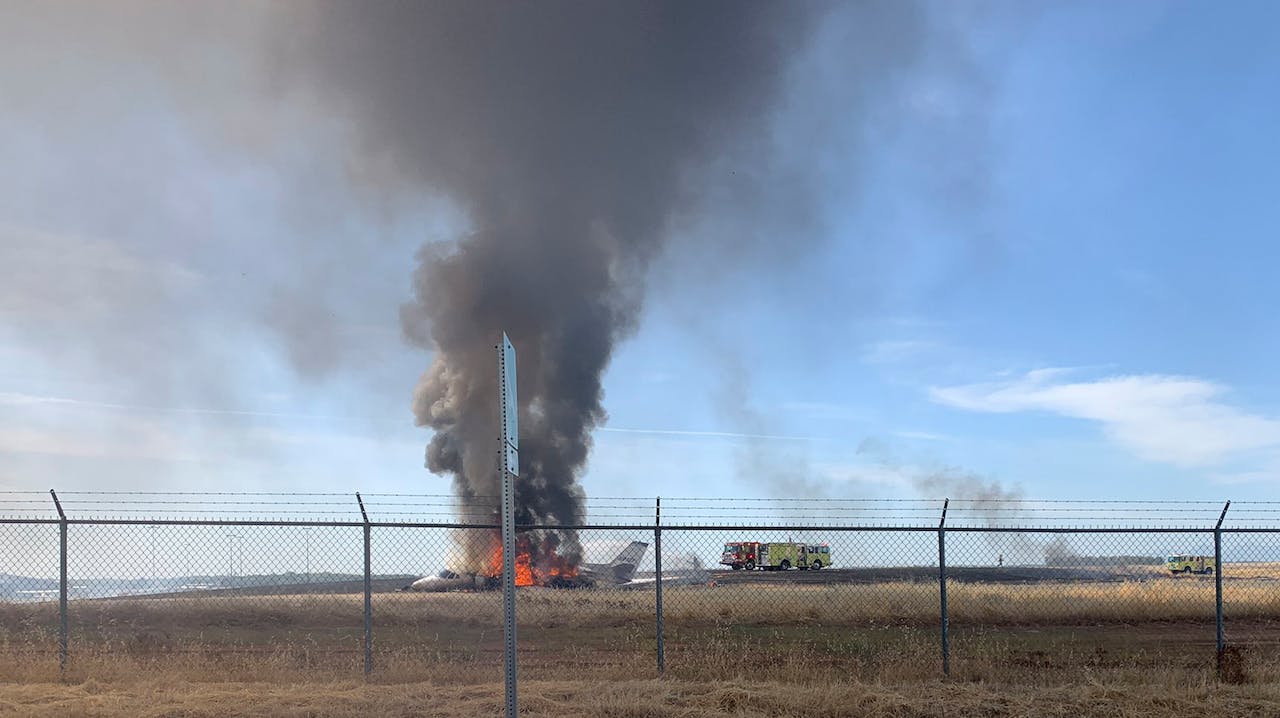 In this photo provided by the California Highway Patrol is the scene where a jet burst into flames after aborting a takeoff Wednesday, Aug. 21, 2019, in Oroville, Calif. Officials say a small jet burst into flames while trying to take off from a small Northern California airport, but all 10 people on board escaped injury. The Federal Aviation Administration says the pilot of the twin-engine Cessna Citation jet aborted its takeoff at Oroville Municipal Airport for unknown reasons shortly before noon Wednesday. The aircraft slid off the end of the runway into the grass and caught fire. The plane was flying from Oroville to Portland International Airport in Oregon.California Highway Patrol via AP

The company makes packaging and containers for food, drinks and other consumer goods.

The executives were touring company plants on the West Coast, Appleyard said. They had been on their way from the company's plant in Oroville to a plant in Portland, Oregon.

The employees lost their belongings, including phones, laptops and identification, Appleyard said.

The jet had complications during takeoff that resulted in its catching fire, said Joe Deal, Oroville's fire and police chief.

National Transportation Safety Board investigators arrived at the scene Thursday to start examining what was left of the jet, which was largely consumed by the flames.

Board spokesman Keith Holloway said they were looking for structural damage, metal fractures and fatigue on the twin-engine Cessna Citation. A Federal Aviation Administration website says the model 560XL jet was manufactured in 2003.

The investigators are also seeking maintenance records, radar data and any video. They plan to interview those on the jet and witnesses to the accident.

It was too soon to say where or how the fire started or why the jet's landing gear appears in photos and videos to have been retracted or collapsed by the time it came to rest in a grassy area off of the runway, Holloway said.

Online records show the jet is registered to Jotts LLC, with an address that tracks to a firm based in Wilmington, Delaware, that provides registered agent services to multiple companies. Records show the operator as Delta Private Jets, a subsidiary of Delta Airlines.

Phone calls to Delta Private Jets went unanswered. But Delta Airlines said in a statement that it is working with the jet's passengers after the two pilots "elected to reject takeoff before leaving the ground."

"While the cause of the incident is currently under investigation, we are providing support to customers involved through reaccommodation and other resources," Delta said.

The airline said the two pilots have 11,000 hours of flight time between them, and online records show no other accidents or incidents involving the aircraft.

The only other incident involving Delta Private Jets, according to online records, was in 2012 in Teterboro, New Jersey, with a different type of jet. It resulted in no injuries, deaths or damage to the Learjet.