Capt. Damir Yusupov landed the aircraft smoothly enough that only one passenger was hurt seriously enough to be hospitalized. 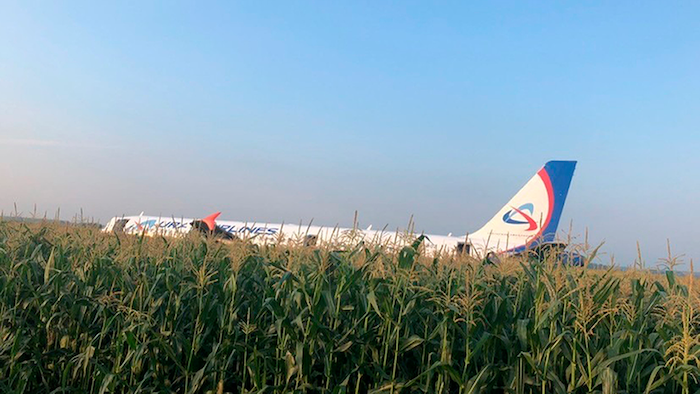 A Ural Airlines A321 plane after an emergency landing in a cornfield near Ramenskoye, Russia, Thursday, Aug. 15, 2019.
Investigative Committee of the Russian Federation via AP

MOSCOW (AP) — A Russian pilot whose passenger jet lost power in both engines after colliding with a flock of gulls shortly after takeoff Thursday managed to land in a cornfield smoothly enough that only one of the 233 people on board was hurt seriously enough to be hospitalized.

The quick thinking of the captain, 41-year old Damir Yusupov, drew comparisons to the 2009 "miracle on the Hudson," when Capt. Chesley Sullenberger safely ditched his plane in New York's Hudson River after a bird strike disabled its engines.

Experts say the two near-tragedies could force aircraft makers and regulators to rethink engine designs so they can better withstand bird strikes, although technology to do that is not yet available.

Yusupov was hailed as a hero after the feat, and Russian television stations showed passengers standing in head-high corn next to the plane, hugging Yusupov and thanking him for saving their lives.

The Ural Airlines Airbus A321 was carrying 226 passengers and a crew of seven as it took off from Moscow's Zhukovsky Airport en route to Simferopol in Crimea.

Russia's Rosaviatsiya state aviation agency chief, Alexander Neradko, told reporters that the crew "made the only right decision" to immediately land the fully loaded plane with its wheels up after both of its engines malfunctioned.

"The crew has shown courage and professionalism and deserve the highest state awards," he said, adding that the plane was fully loaded with 16 tons of fuel. "Just imagine what the consequences would be if the crew didn't make the correct decision."

The airline said Yusupov, the son of a helicopter pilot, is an experienced pilot who has logged over 3,000 flight hours. He worked as a lawyer before he changed course and joined a flight school when he was 32. A father of four, he has flown with Ural Airlines since his graduation in 2013. He became a captain last year.

Yusupov's wife told Rossiya state television from their home in Yekaterinburg that he called her after landing, before she had heard about the emergency.

"He called me and said: 'Everything is fine, everyone is alive,'" she said. "I asked what was it, and he said that birds hit the engine and we landed in a field. I was horrified and in panic and burst into tears."

Russian officials immediately rushed to shower the pilot and crew with praise. President Vladimir Putin's spokesman, Dmitry Peskov, hailed the pilots as "heroes" and said they will receive state awards. Prime Minister Dmitry Medvedev opened a session of Cabinet by praising the crew and asking the transport minister to explain what happened.

The Emergencies Ministry said that 74 people asked for medical assistance after the incident. Health authorities said 23 people, including five children, were taken to the hospital, but all but one was released following check-ups.

Bird strikes on planes occur regularly around the world even though airports use bird distress signals, air cannons and other means to chase them from runways. Smaller birds are usually chopped up by turbine fan blades, but engines aren't designed to withstand strikes from multiple birds or larger birds such as geese, said John Hansman, an aeronautics professor at the Massachusetts Institute of Technology.

Birds rarely disable both of a jet's engines, but with two cases reported in a decade, jet makers may have to redesign future engines to better resist such a strike, Hansman said.

"That's likely to be a discussion, just because the overall aviation system learns from incidents like this," he said, adding that risks and probabilities will have to be weighed.

John Goglia, a former member of the U.S. National Transportation Safety Board, said the bird-vs- engine problem has been under study for years, with no fix available at present. If engine components are made of heavier, stronger materials, there's a risk that they could crack and break off, striking the fuselage and injuring passengers, he said.

"As far as the engine being able to digest the larger birds, we don't have the technology," he said. "We don't have the metals. They really pushed the envelope where we are today."

Airports could also deal with the problem on the ground by monitoring birds with radar and restricting takeoffs when large flocks are in the area, Hansman said.

Some Russian media reports suggested the birds could have been drawn to Zhukovsky Airport by an unauthorized garbage dump nearby, but there was no immediate confirmation of the claim.

On Jan. 15, 2009, a US Airways Airbus A320 piloted by Sullenberger hit a flock of geese after taking off from New York City's LaGuardia Airport and both of its engines shut down. The crew made an emergency landing in the Hudson River along midtown Manhattan and all 155 people aboard survived despite landing in frigid water.

The so-called "miracle on the Hudson" was immortalized in the Hollywood movie "Sully," based on the autobiography of Sullenberger and starring Tom Hanks.

Pilots train often to fly with one engine disabled, but it's rare for birds to knock out both engines, experts say. Still, pilots do prepare to lose both engines and often know the safest places near an airport to land, said Goglia, who spoke often about bird strike risks when he was an NTSB member.

Another problem is that many Canada geese, which caused Sullenberger's Hudson River emergency landing, are not migrating as often due to warmer temperatures blamed on climate change, so they're around northern airports for longer periods, Hansman said.

With both engines down, the Russian pilot was flying what essentially is a glider that he could control for a limited time. His toughest decision, Hansman said, was where to try to land.

"When you're in a glider, you've got a certain amount of altitude," he said. "You have to make the judgment what's the best place I can fly with the amount of energy I have left because I'm not getting any more from the engine."

Besides a runway, a cornfield is a good place to land because it's free of big rocks and trees that could damage the plane, Goglia said.

The lack of deaths or serious injuries is an example of how the aviation safety system worked correctly, according to Hansman.

Aircraft seats are manufactured to protect passengers in cases like this, and the fuel tanks are designed to stay intact for a rough landing to prevent fires. And the pilots seemed to be well prepared for such an emergency, Hansman said.

"The pilot did a good job, but that's why he was there," he said.