The moon will serve as a critical proving ground, the thinking goes, for the real prize of sending astronauts to Mars in the 2030s. 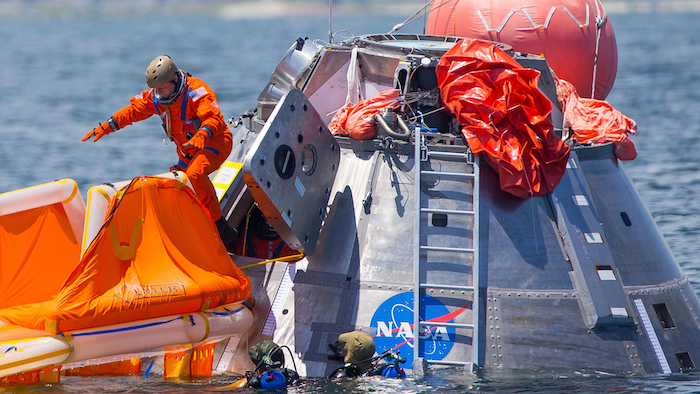 The White House wants U.S. astronauts on the moon pronto — by 2024, a scant five years from now. The moon will serve as a critical proving ground, the thinking goes, for the real prize of sending astronauts to Mars in the 2030s.

The billionaires' space club is on board. Amazon's Jeff Bezos and Virgin Galactic's Richard Branson favor moon before Mars. SpaceX's Elon Musk also is rooting for the moon, although his heart is on colonizing Mars.

But Apollo 11 astronaut Michael Collins prefers a beeline to Mars. Buzz Aldrin, too, is a longtime Mars backer. Back in 1994 on the 25th anniversary of his moon landing with Neil Armstrong, Aldrin questioned whether astronauts would be back on the moon by the 50th anniversary let alone on Mars, which was the short-lived goal at that time.

Fast-forward to the golden anniversary and NASA doesn't even have the capability to get astronauts into orbit around Earth. Russians are launching American astronauts to the International Space Station — for high prices — until capsules built by SpaceX and Boeing are ready. That likely won't happen until next year, almost a decade after NASA's space shuttle program ended.

"Fifty years ago ... we landed, explored, got back up again, rendezvoused, came back. That's 50 years of non-progress," Aldrin groused earlier this month during his anniversary bash near Los Angeles. "I think we all ought to be a little ashamed that we can't do better than that."

Collins, who circled the moon in the mother ship while Aldrin and Armstrong planted a U.S. flag and gathered rocks, acknowledges that returning to the moon as a stepping stone to Mars is "a valid plan."

Even President Donald Trump — whose vice president is out there plugging moonshots — prefers talking up Mars. In an Oval Office meeting with Aldrin and Collins on the eve of the landing anniversary, Trump asked if it was possible to send astronauts to Mars without revisiting the moon. Collins replied yes.

"Who knows better than these people, right? They've been doing this stuff for a long time," the president said. He later instructed NASA Administrator Jim Bridenstine to "listen to the other side."

If there's one thing NASA has learned in the half-century since Armstrong and Aldrin's moonwalk, it's that all the flip-flopping between the moon and Mars by presidential administrations has left astronauts no farther than the International Space Station since the sixth and final Apollo moon landing in 1972.

Despite a lack of human presence on the moon, robotic spacecraft are exploring the gray, dusty world. NASA's Lunar Reconnaissance Orbiter has been circling the moon for the past 10 years. Earlier this year, China landed a craft on the far side of the moon. And on Monday, India plans to launch a mission to the moon's south pole.

Tackling an engineering problem like getting astronauts to the moon, according to Bezos, requires consistency. It also requires government involvement, given the expense and scale of the project, he noted, as well as multiple companies, not just his own Blue Origin which is intent on building lunar landers.

"What I really hope is that we stick with going back to the moon this time to stay because that is actually the fastest way to get to Mars," Bezos said at the John F. Kennedy Presidential Library's space summit last month. "It's the illusion that you can skip a step. Skipping steps slow you down. It's seductive, but wrong."

Branson, whose company is working to take tourists on short flights into space, sees the moon as a more realistic destination for astronauts right now.

"Getting somebody onto Mars will be spectacular, almost as an awe-inspiring thing as the moon landing," Branson said at NASA's Kennedy Space Center on Wednesday. "But I think as far as putting time and energy and money into it, I think the moon."

As the 50th anniversary parties wind down — Apollo 11's wondrous eight-day voyage ended with a Pacific splashdown on July 24, 1969 — NASA keeps cranking up the lunar spotlight.

Project Artemis, as it's called after the twin sister of Greek mythology's Apollo, aims for a landing on the moon's south pole. The key, said Bridenstine, is sustainability. Hundreds of millions of tons of ice line the permanently shadowed craters at the bottom of the moon, a precious source of water for drinking, growing food and making rocket fuel.

"We will spend weeks and months, not days and hours on the lunar surface," Vice President Mike Pence promised during Saturday's moon landing celebration with Aldrin at Kennedy. "This time we're going to the moon to stay and to explore and develop new technologies."

Astronaut safety is paramount in getting to the moon. But speed and cost are close seconds. By moving up the target lunar landing date from 2028 to 2024, NASA hopes to retire as much political risk as possible by getting out of the gate fast.

"If it wasn't for the political risk, we would be on the moon right now. In fact, we would probably be on Mars right now," Bridenstine said last week.

The NASA chief estimates his agency will need $20 billion to $30 billion extra to achieve a 2024 moon landing, quite possibly less if private companies invest their own money "and I'm talking a lot of money."

As for technical risk, NASA needs new lunar landers and spacesuits, neither of which presently exist.

NASA's Space Launch System, or SLS, megarocket, meanwhile, has faced technical challenges and delays. Its debut flight around the moon — with an empty Orion capsule — is now probably off until 2021.

The first flight around the moon with a crew would follow in 2022 or 2023. In the meantime, a mini space station dubbed the Gateway — whose need is questioned even by some within NASA — would be built in lunar orbit. A pair of astronauts would descend from this orbiting Gateway to the lunar surface, ideally by the end of 2024. The Gateway eventually could serve as the departing point for Mars expeditions under the NASA plan.

NASA currently has 38 astronauts, 12 of whom are women.