Protesters won't back down from a long-running effort to stop construction of a $1.4 billion telescope. 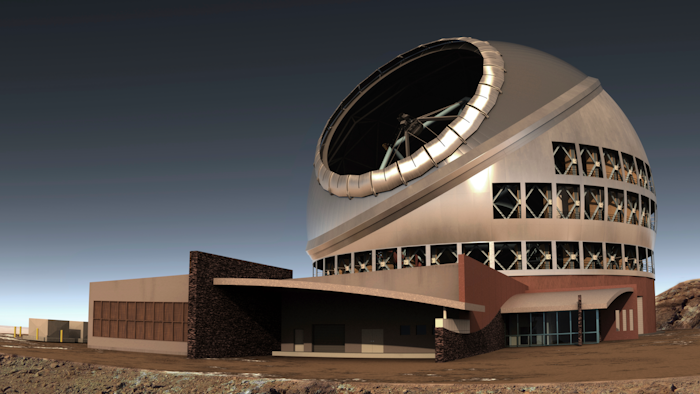 This undated file illustration provided by Thirty Meter Telescope (TMT) shows the proposed giant telescope on Mauna Kea on Hawaii's Big Island. Construction on giant telescope to start again in the third week of July 2019, after court battles over Hawaii site that some consider sacred.
TMT via AP, File

HONOLULU (AP) — Protesters didn't back down from their long-running effort to stop construction of a $1.4 billion telescope, blocking a road Thursday to the top of a mountain sacred to some Native Hawaiians a day after authorities arrested nearly three dozen people.

Activists have fought the Thirty Meter Telescope in the courts and on the streets for years, but the latest protest could be their final stand as they run out of legal options. The state Supreme Court has given the green light to the project that would put one of the world's most powerful telescopes atop Mauna Kea on the Big Island.

Gov. David Ige has signed an emergency proclamation to broaden the state's power to keep activists off Hawaii's tallest peak. It came after police negotiated with protesters for days before arresting a small group of 34 activists who refused to move from the road Wednesday.

"The number of protesters have swelled and their blockage of roads and highways creates a dangerous situation," Ige said. "This affects the ability of first responders to address emergencies."

Ige also said the protest is affecting the public's ability to move "freely and safely" across the Big Island. A critical highway that cuts across the center of the island and leads to the road up Mauna Kea was closed for several hours Wednesday because of the protests.

Officials haven't yet decided whether to oust the protesters entirely, but the proclamation makes that possible, Ige said.

"We are certainly committed to ensuring the project has access to the construction site," Ige said. "We've been patient in trying to allow the protesters to express their feelings about the project."

The state said construction equipment planned to go up the mountain starting Monday, but the protests have delayed it. It's unclear when the work would begin.

After the arrests, most of the protesters have been allowed to stay, and many were camping out at night on public land.

A group of existing telescopes sit atop Mauna Kea and have been used by NASA and other scientists to make discoveries about space for decades. The mountain has consistently clear weather and very little light pollution.

Plans to build the new telescope began in 2009, but Native Hawaiian opponents who say the mountain is sacred have slowed construction with drawn-out legal battles and by physically blocking crews from starting work.

They have sued again to argue that the project must post a security bond equivalent to the construction contract cost before starting to build.

Telescope officials said the challenge lacks merit and is another delay tactic.