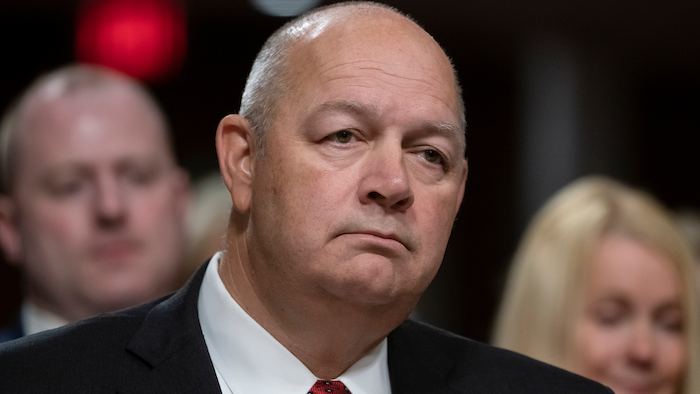 In this May 15, 2019, file photo, Stephen M. Dickson appears before the Senate Committee on Commerce, Science, and Transportation for his confirmation hearing.
AP Photo/J. Scott Applewhite, File

President Donald Trump's nominee to lead the Federal Aviation Administration won approval from a Senate committee Wednesday despite objections from Democrats who questioned the actions of the former Delta Air Lines executive in a case involving a pilot who raised safety issues.

The Commerce, Science and Transportation Committee voted 14-12 along party lines to send the nomination of Stephen Dickson to the full Senate.

Democrats faulted Dickson for failing to disclose his involvement in the case of Karlene Petitt, a pilot who charges that Delta retaliated against her after she raised safety concerns to Dickson and other executives.

If approved, Dickson would head an agency that is investigating one of Petitt's allegations, that Delta failed to implement required safety procedures.

Sen. Maria Cantwell of Washington state, the highest-ranking Democrat on the committee, said Petitt reported several concerns to Delta, including pilots relying too much on automation to fly.

Delta ordered Petitt to undergo a psychiatric evaluation that declared her unfit to fly. That finding was later overturned by other psychiatrists. Last fall, Dickson gave a lengthy deposition in Petitt's pending whistleblower claim against Delta in which he said he agreed with the decision to order a psychiatric examination.

Cantwell said Dickson failed to mention the matter in committee testimony, but senators later found documents about the case.

"It's very clear that Mr. Dickson did know, was involved with this pilot, did know what was happening and failed to disclose it to this committee," Cantwell said. "We certainly can't have organizations threaten pilots with this kind of retaliation."

But Chairman Roger Wicker, R-Miss., said the committee conducted an "extensive review" after it learned of the whistleblower case and found that Dickson wasn't named in any lawsuits or administrative proceedings and was not accused of retaliating against employees who raised safety concerns. He said the committee studied hundreds of pages of legal documents.

"I believe Mr. Dickson is an excellent nominee for this position," Wicker said. "I think he will bring commitment, experience and expertise necessary to lead the FAA and fulfill its mission."

The only other senator who spoke before the vote, Connecticut Democrat Richard Blumenthal, said Dickson is "simply the wrong person to head the FAA." He suggested that Dickson's long tenure at Delta makes it impossible for him to be independent of the airline industry.

Chesley "Sully" Sullenberger, who landed a crippled airliner safely on the Hudson River in 2009, had lobbied against Dickson's nomination. He said the FAA needs an administrator "who will act with integrity and independence to protect everyone who flies."

Dickson, who was an Air Force pilot before joining Delta as a pilot and rising to senior vice president of flight operations, has broad support from the airline industry.

"He's a great leader," said Dickson's former boss, Delta CEO Ed Bastian. "The FAA needs some great leadership, given the challenges around the Max and other matters, and I think Steve will be an outstanding choice."

Nicholas Calio, CEO of Airlines for America, which represents most major U.S. carriers, said Dickson "is uniquely qualified to provide the vision, leadership and experience needed" to run FAA. Delta left Calio's trade group in 2015 after disagreements over policy.

The FAA has been led by an acting administrator since January 2018. The agency is under scrutiny over its approval of the Boeing 737 Max airliner. Two of the planes crashed within the past year in Indonesia and Ethiopia, killing 346 people.