It depicts the Enola Gay, a plane used to drop an atomic bomb during World War II. 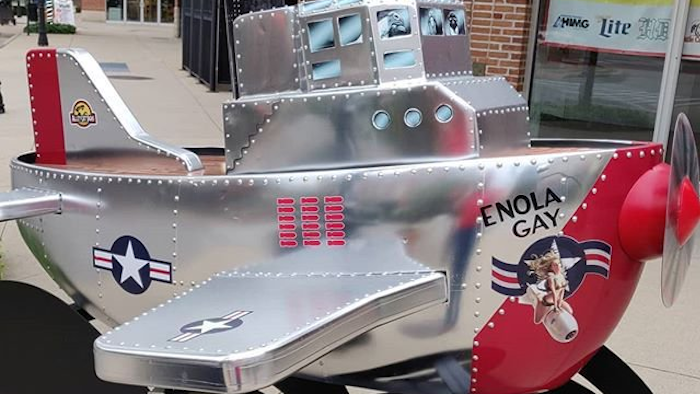 HUNTINGTON, W.Va. (AP) — A Marshall University professor has submitted a complaint to the Cabell Huntington Hospital Foundation after public concern over a submission in the foundation's Artisans Express fundraiser for the Hoops Family Children's Hospital because it depicts a plane used to drop an atomic bomb during World War II.

The Tri-State Artisans Express public art project benefits the Hoops Family Children's Hospital at Cabell Huntington Hospital. In February, artists submitted their proposals for designs, and 38 artists were selected to decorate the tugboats, which were auctioned off for the fundraiser June 16. The tugboats will remain on display around the city through Oct. 31. Each tugboat has a unique theme, like Jim's Steak and Spaghetti House, Bigfoot or paying tribute to Collis P. Huntington.

One tugboat, a rendition of the Enola Gay, the plane that dropped the atomic bomb on Hiroshima, Japan, during World War II on Aug. 6, 1945, has drawn negative attention from the public.

Cabell Huntington Hospital received a letter from Zelideth Rivas, a professor of Japanese at Marshall University, condemning the Enola Gay tugboat. The Herald-Dispatch also received a copy of the letter from Rivas.

According to Rivas' letter, the tugboat was sponsored by Marshall Health, but the organization withdrew the sponsorship after the community spoke out against the design.

"In particular, the community was shocked to see the fourteen imperial Japanese flags on one side of the plane and bombs on the other side, a visual reminder of the devastation that the Enola Gay caused on August 6, 1945," Rivas wrote.

In the letter, Rivas cites the extensive damage caused by the atomic bomb, and points out that it is particularly counterproductive to the mission of the fundraiser because the bomb was dropped directly over Hiroshima's hospital, killing all but 20 of the city's 200 doctors and 150 of the city's 1,780 nurses.

"As a fundraiser for Cabell Huntington Hospital Foundation, I am surprised to see that this tugboat that celebrates these damages to the health care industry was allowed to be commissioned, yet alone displayed in public," Rivas wrote.

According to Bradley Burck, vice president of the Cabell Huntington Hospital Foundation, the submissions for the fundraiser were reviewed by a committee of volunteer community members. Burck said he reached out to Rivas and now has a "deeper understanding of her concerns."

"Any offense was unintentional, and the CHH Foundation apologizes for any perceived insensitivity," Burck said in a statement. "It was not the intention of the artist of the Enola Gay tugboat or the committee to offend anyone. Art is intended to evoke a wide range of responses and emotions that push viewers to have respectful conversations, and I'm pleased to have had that opportunity with Dr. Rivas. We agreed to explore ways to have further public discussion on this topic."

Attempts to reach the artist, Martin Brescoach, were unsuccessful.

Rivas also cites West Virginia's relationship with Japan, stating that the state is home to 21 Japanese companies, and the state also opened an international development office in Nagoya, Japan, in 1990. Rivas said these companies create jobs and opportunities for West Virginians and are engaged in their local communities, supporting causes like libraries and the Huntington Pride Festival.

"The companies support these organizations because it is their community and their Japanese and Japanese-American employees live in these communities," Rivas said. "Imagine how they feel when they have to confront such a horrendous reminder of anti-Japanese sentiment in their own community."