The sale to China Aviation Supplies Holding Company is estimated to be worth $34 billion at list prices, but buyers often secure discounts. 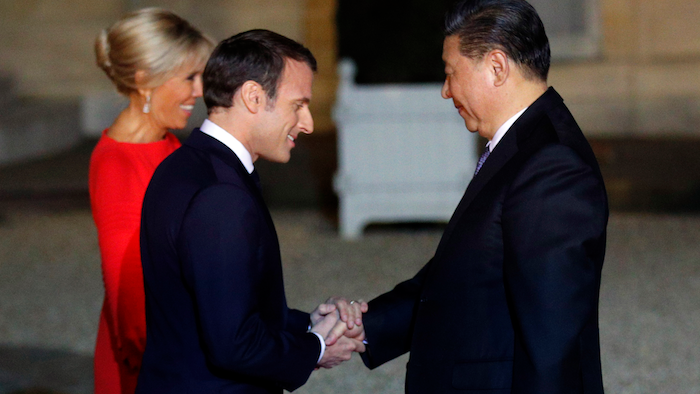 Chinese President Xi Jinping received the full honors of a formal reception during a state visit to France on Monday that included attending the signing of a multi-billion dollar deal between European aircraft maker Airbus to China.

French President Emmanuel Macron said Xi's official visit was an "excellent signal" of the strength and reliability of relations between China and France. Appearing with the Chinese leader at the presidential Elysee Palace, Macron said the two countries want to build a "strong Euro-Chinese partnership, based on clear, strict and ambitious rules."

Xi, who plans to meet with German Chancellor Angela Merkel and European Commission President Jean-Claude Juncker in Paris on Tuesday, said China "attaches great importance" to its relations with Europe.

European leaders want to increase trade with China, albeit on European terms, amid trade tensions between the United States and both China and the European Union.

The Airbus sale Xi saw finalized involves the sale of 300 airplanes. The China Aviation Supplies Holding Company has ordered 290 Airbus A320 and 10 Airbus A350, according to a statement from the French presidency.

The price was not specified. The sale is estimated to be worth 30 billion euros ($34 billion) at list prices, although buyers often secure discounts.

"We are honored to support the growth of China's civil aviation with our leading aircraft families," said Guillaume Faury, president of Airbus Commercial Aircraft. "Our expanding footprint in China demonstrates our lasting confidence in the Chinese market and our long-term commitment to China and our partners."

Other major business deals on renewable energy and the food industry were signed Monday, in addition to bilateral agreements.

Both leaders agreed on a protocol allowing the French exports of chicken meat to China. The country opened its market to French beef products following Macron's January 2018 state visit to China.

Macron said during his appearance alongside Xi that China and France share views on the importance of combating climate change, with green investments abroad making up part of the strategy.

Earlier in the day, the French leader welcomed Xi and his wife, Peng Liuan, at the Arc de Triomphe monument in Paris. The French National Guard played the country's anthems. Both leaders laid a wreath at the Unknown Soldier from World War I whose tomb is under the monument.

Xi and Macron also confirmed the opening of a branch of the Pompidou Center, a modern art museum in Paris, in Shanghai this fall.

Xi started his trip to Europe last week, signing deals in Italy and heading to Monaco on Sunday to ink more. He arrived in France on Sunday evening where he had a private dinner with Macron in the resort town of Beaulieu-sur-Mer on the French Riviera.