Founder Elon Musk said the Starship test vehicles would be built in southern Texas instead of a planned facility at the Port of Los Angeles. 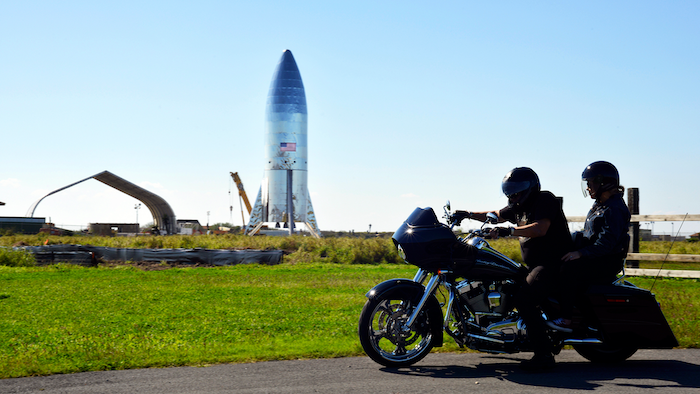 In this Jan. 12, 2019 file photo, a motorcyclist rides near the SpaceX prototype Starship hopper at the Boca Chica Beach site in Texas.
Miguel Roberts/The Brownsville Herald via AP, File

SpaceX said Wednesday that it will build test versions of its Mars spaceship in south Texas instead of the Port of Los Angeles in another blow to the local economy that comes days after the company announced massive layoffs.

The decision was made to streamline operations, the Hawthorne, California-based company said in a statement.

SpaceX won approval last year to lease 19 acres at the port's Terminal Island. It planned to erect a new facility to do work on the interplanetary spacecraft, now called Starship, and its launch vehicle, the Super Heavy, which would be the largest rocket ever built.

The port facility would have allowed the giant craft to be barged or shipped to launch sites. It could have added about 700 jobs to the area.

SpaceX founder Elon Musk tweeted that development of Starship will continue in Hawthorne but prototypes will be built in south Texas. The company has a launch facility in Boca Chica near Brownsville, where one prototype of the spacecraft already has been assembled.

"We are building the Starship prototypes locally at our launch site in Texas, as their size makes them very difficult to transport," Musk said.

SpaceX will continue using its existing port facilities to recover its reusable Falcon rockets and Dragon spacecraft, which arrive by water.

Southern California officials have talked about luring high-tech operations to boost the waterfront and create a "Silicon Harbor."

"While we are disappointed that SpaceX will not be expanding their operations at the Port of Los Angeles, we are pleased that they will continue their recovery operations here," port spokesman Phillip Sanfield said. "Our ongoing work with SpaceX and other advanced technology companies is important to our efforts to advance the port through innovation and new technologies."

Los Angeles City Councilman Joe Buscaino said he felt crushed by the decision, but "I feel confident that other innovators will see the huge value they get in San Pedro."

Last Friday, SpaceX announced it would lay off 10 percent of its roughly 6,000 workers, most of them at its Hawthorne headquarters. The company said it needs to become leaner to accomplish ambitious and costly projects such as the Starship and Starlink, which would create a constellation of satellites to provide space-based broadband internet service.

Development costs for those two projects have been estimated at up to $10 billion each.