Company officials had warned of a slowdown due to fewer orders from the geo-telecommunications industry.

Nearly 600 SpaceX workers are out of a job after the company announced that it was shedding about 10 percent of its workforce.

According to Bloomberg, the news was a bitter pill for workers to swallow as the company was celebrating its first rocket launch of 2019.

A majority of the cuts will come from staff at the company's headquarters in Hawthorne, Calif. About 577 jobs will be lost, including machinists, production managers and technicians. The company had more than 6,000 employees on the payroll, primarily in California, but also in Texas, D.C., Florida and Seattle.

Last May, SpaceX President and COO Gwynne Shotwell warned of a slowdown due to fewer orders coming from the geo-telecommunications industry.

According to an email sent from Shotwell to employees, the cuts were a "very difficult but necessary decision" and come as part of an effort for SpaceX to "become a leaner company."

This is the second of Elon Musk's companies to experience some big personnel cuts. Last June, Tesla let go of 9 percent of its workforce.

The former employees will get at least eight weeks’ pay as well as other benefits, such as help finding a new job. 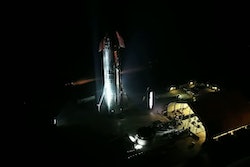