Oscar Munoz said the Boeing 737 MAX is safe and reliable in his first comments about the plane since a Lion Air flight crashed in October. 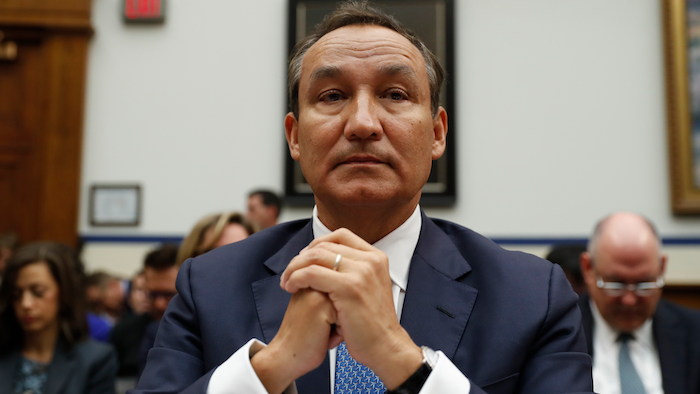 The CEO of United Airlines says his pilots don't need any additional training on the new Boeing jet that is at the center of the investigation into a deadly crash in Indonesia.

Oscar Munoz says that's because United's pilots are prepared to respond to problems that might surface with automated systems on modern planes.

"When any trouble arises, our pilots are trained to fly the damn aircraft, period," Munoz told reporters Wednesday.

He said pilots are taught to disconnect automated systems, fly the plane by hand, and gain altitude to buy time while they trouble-shoot problems. He said the Boeing 737 MAX is safe and reliable.

The remarks were Munoz's first public comments about the plane since the Oct. 29 Lion Air accident, which killed 189 people when the Boeing 737 MAX plunged into the Java Sea.

Indonesian investigators are examining the role of faulty sensor readings from an anti-stall system that repeatedly pushed the nose of the Lion Air jet down. Information from a preliminary report indicates that the pilots tried to counter the downward pitch and deal with other cockpit warnings but lost control of the plane a few minutes after takeoff.

United, American Airlines and Southwest Airlines all use the new Boeing model, which was first delivered to airlines around the world last year.

Pilots at American and Southwest complained that they were not told about a new feature that could push the nose of the plane down automatically based on a sensor measurement. The pilots' union at American has asked for additional training on the anti-stall system. American said it has added information about the system to its regular pilot-refresher training.

Munoz's comments came during a wide-ranging call with reporters in which he announced new international flights from San Francisco, boasted about United's performance on the stock market this year — its shares are up more than 30 percent while many other airlines stocks are down — and criticized an Italian carrier's plan to launch more flights to the U.S.

Air Italy is 49 percent owned by Qatar Airways, which United, American and Delta have accused of unfair competition due to heavy subsidies from its government. In January, the Trump administration and Qatar reached an agreement under which Qatar Airways will eventually disclose more details about its finances.

In a side letter to the deal, Qatar Airways said it was not considering new flights to the U.S. from third countries. Munoz said Air Italy's planned flights from Milan to Los Angeles and San Francisco would violate the agreement and amount to "kind of an in-your-face" to the Trump administration.