The NTSB hearing focused on design and inspection of fan blades on the engine, made by CFM International, a joint venture of General Electric and France's Safran S.A. 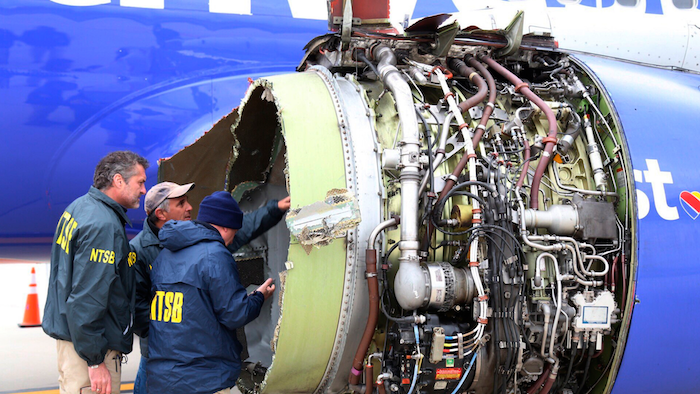 In this April 17, 2018, file photo, NTSB investigators examine damage to the engine of the Southwest Airlines plane that made an emergency landing at Philadelphia International Airport.
NTSB via AP

There was a loud bang, and suddenly the Southwest Airlines jet rolled sharply to the left. Smoke began to fill the cabin, and flight attendants rushed row by row to make sure all passengers could get oxygen from their masks.

When flight attendant Rachel Fernheimer got to row 14, she saw a woman strapped in her lap belt but with her head, torso and arm hanging out a broken window.

Fernheimer grabbed one of the woman's legs while flight attendant Seanique Mallory grabbed her lower body. They described being unable to bring the woman back in the plane until two male passengers stepped in to help.

The harrowing details from the April 17 fatal flight were released for the first time as the National Transportation Safety Board began a hearing Wednesday into the engine failure on Southwest Flight 1380, which carried 144 passengers and five crew members.

The flight attendants told investigators at least one of the male passengers put his arm out of the window and wrapped it around the woman's shoulder to help pull her back in. Fernheimer said when she looked out the window, she could see that one of the plane's engines was shattered, and there was blood on the outside of the aircraft.

Flight attendants asked for medical volunteers. A paramedic laid the woman across a row of seats and began chest compressions. They tried a defibrillator but it indicated that there was no shock. The paramedic and a nurse took turns at CPR.

Pilots Tammie Jo Shults and Darren Ellisor landed the crippled Boeing 737 in Philadelphia. The passenger in the window seat, Jennifer Riordan, was fatally injured — the first death on a U.S. airline flight since 2009. Eight other passengers, including at least one of the men who helped pull Riordan back in the window, suffered minor injuries.

Wednesday's hearing in Washington focused on design and inspection of fan blades on the engine, made by CFM International, a joint venture of General Electric and France's Safran S.A.

An official from CFM defended the design and testing of fan blades like the one that snapped on the Southwest plane as it flew high above Pennsylvania, triggering an engine breakup that flung debris like shrapnel into the plane.

After the fatal accident, CFM recommended the use of frequent and more sophisticated tests using ultrasound or electrical currents.

Another Southwest jet had suffered a similar blade-related engine breakup in 2016 over Florida.

CFM and federal regulators considered the Florida incident an aberration.

"We determined early that we would require some corrective action in that it was an unsafe condition," an FAA expert on engines, Christopher Spinney, testified on Wednesday, "but we also determined we had some time."

Rather than order immediate inspections of fan blades after the 2016 incident, the FAA began a slower process for drafting a regulation and getting public comment before enacting it. That process was still underway when the fatal accident occurred nearly two years later.

Since the deadly flight, widespread inspections have turned up eight other fan blades on similar CFM engines that also had cracks. The fan blade that broke was last inspected six years earlier and, it was determined, suffered from metal fatigue even then — but it went unnoticed by a less sophisticated exam used at the time.

Fan blades have been thought to have no real lifetime limit. CFM and FAA officials said they were now considering whether blades must be replaced at some point even if they don't show wear.

Representatives from CFM also testified about testing and certification of jet engines, which are supposed to be built to prevent pieces from breaking off and flying free.

The investigation is continuing. Most of Wednesday's hearing was highly technical. It was led by one of the safety board's five members, Bella Dinh-Zarr. The full board is expected to determine a probable cause for the accident in the next several months.

Meanwhile, Riordan's husband, Michael, said in a statement on behalf of his family that they were "grateful for the heroic actions of the passengers who tried to save Jennifer's life."

"The most important thing now is making sure that the aircraft and engine failures that caused Jennifer's untimely and unnecessary death never happen again," he said. 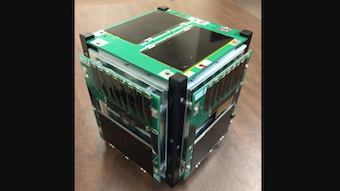