Rocket Lab said it will build its launch pad at the Mid-Atlantic Regional Spaceport on the Eastern Shore. 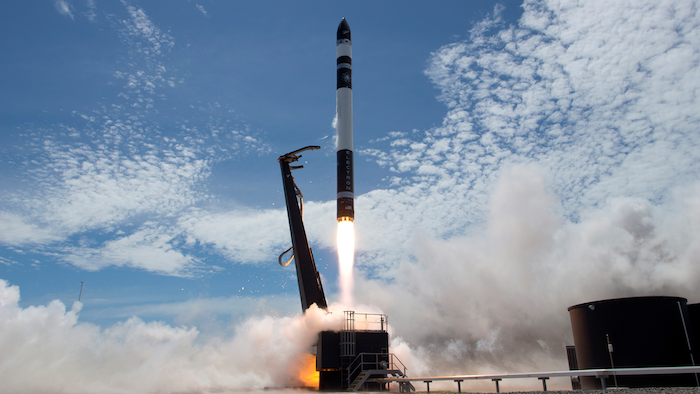 In this Jan 21, 2018, file photo provided by Rocket Lab, an electron rocket carrying only a small payload of about 150 kilograms lifts off from the Mahia Peninsula on New Zealand's North Island's east coast.
Rocket Lab via AP, File

A California-based startup said Wednesday that it will rocket small satellites into orbit from Virginia, an endeavor that reflects increasing demand from companies and governments alike to monitor ships, crops and the weather from space.

Rocket Lab said it will build its launch pad at the Mid-Atlantic Regional Spaceport on the Eastern Shore. It's located at NASA's Wallops Flight Facility where unmanned cargo missions already are dispatched to the International Space Station.

Rocket Lab, which recently built its first launch pad in New Zealand, is setting up in Virginia at a time of unprecedented growth in the use of smaller and relatively inexpensive satellites.

As small as a loaf of bread, the devices circle the earth for a few years before burning up in the atmosphere. Atlanta-based consulting firm SpaceWorks predicted in January that up to 2,600 of these will need to be launched into orbit over the next five years.

The industry is attracting venture capitalists, while firms in China and companies such as Virgin have built launch systems dedicated to the smaller devices. Dozens more are under development.

Rocket Lab has sent up two rockets so far, humorously calling those missions "It's a test" and "Still testing." The second rocket successfully reached orbit in January.

Rocket Lab's next commercial mission, known as "It's Business Time," is scheduled to lift off from New Zealand in November. Launches from Virginia are set to begin as early as summer 2019.

Small satellites have often hitched rides on rockets carrying bigger satellites into orbit or with supplies to the space station. But more firms are offering small satellites their own launches, providing more control over their schedules and the orbits to which they're delivered.

Rocket Lab said its cargo in January included an earth-imaging satellite for Planet, a company that offers clients information on anything from flooding to deforestation.

NASA also has a contract with Rocket Lab to deliver small satellites. But the firm's most famous cargo was perhaps the "Humanity Star," a geodesic sphere designed to reflect the sun's light back to Earth.

Beck said he hoped it would remind people to look past daily concerns and face larger challenges like climate change. The "Humanity Star" fell out of orbit a couple months after the January launch. Its life span was up to nine months.

Currently, there are four companies that have developed six vehicles dedicated to launching small satellites, and dozens more are under development, according to Carlos Niederstrasser, an engineer with Northrop Grumman who tracks the industry. His company also launches small satellites.

Other firms getting into this market include Virgin Orbit, a sister outfit to space-tourism company Virgin Galactic. It's been testing a small rocket that is to launch satellites into space from a 747 jet flying at 35,000 feet (10,000 meters). Chinese firms are also up and running.

Niederstrasser wrote in his 2018 industry survey that the market won't be able to support most of the new companies. But he said it's clear that the company's founders and investors believe there'll be room for at least some.