He is suspected of "gross negligence in maritime traffic" and "aggravated drunken seafaring." 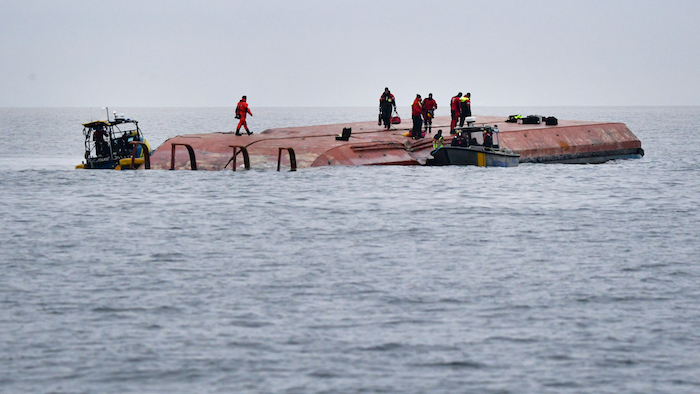 COPENHAGEN, Denmark (AP) — Swedish prosecutors said Wednesday that a Croatian national had been released because the suspicion against him of being drunk on the British freighter that collided with a Danish freighter off southern Sweden had “weakened” but he remains a suspect. A British citizen was still detained.

Monday’s pre-dawn collision with Danish-flagged Karin Hoej caused the latter to capsize. One person was later found dead inside the hull and another is missing. The collision happened in foggy weather.

Prosecutor Tomas Olvmyr said the British citizen born in 1991 remained detained and “suspicions against him have not weakened.” He is held suspected of “gross negligence in maritime traffic, aggravated drunken seafaring,” and causing another person’s death. Olvmyr added that the prosecution must decide whether to formally arrest the Briton by noon Thursday at the latest.

Earlier this week, the British shipping company said crew aboard the Scot Carrier were tested for drugs and alcohol after the collision and “two crew members exceeded the limit.” It wasn't clear whether they were referring to the Briton and Croatian or other crew members.

The Croatian man who is suspected of “gross sea drunkenness” was born in 1965. None of their names were released.

Media in Sweden have reported that the Scot Carrier continued its route after the collision and was afterwards ordered back to the scene by Swedish authorities. The capsized vessel was towed closer to land so divers from the Swedish armed forces and the coast guard, among others, could search it.